Some 20,000 marines, seamen and air crews from half a dozen countries, a US nuclear aircraft carrier strike group and three US Marine gunship carriers are practicing an attack... 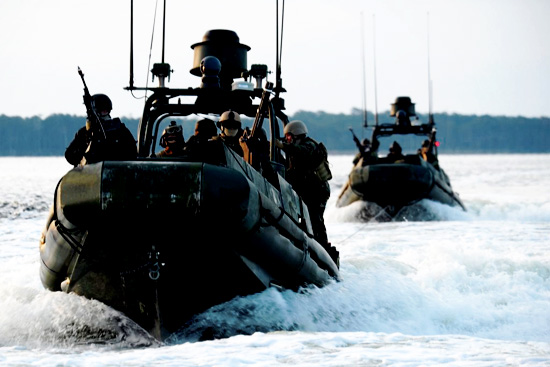 Bold Alligator went into its operational phase Monday, Feb. 6, the same day as a large-scale exercise began in southern Iran opposite the Strait of Hormuz.
by Geoffrey Grider February 7, 2012
NOW THE END BEGINS SHARE:

Some 20,000 marines, seamen and air crews from half a dozen countries, a US nuclear aircraft carrier strike group and three US Marine gunship carriers are practicing an attack on a fictitious mechanized enemy division which has invaded its neighbor. It is the largest amphibian exercise seen in the West for a decade, staged to simulate a potential Iranian invasion of an allied Persian Gulf country and a marine landing on the Iranian coast. Based largely on US personnel and hardware, French, British, Italian, Dutch, Australian and New Zealand military elements are integrated in the drill.

Bold Alligator went into its operational phase Monday, Feb. 6, the same day as a large-scale exercise began in southern Iran opposite the Strait of Hormuz.

Bold Alligator went into its operational phase Monday, Feb. 6, the same day as a large-scale exercise began in southern Iran opposite the Strait of Hormuz. This simultaneity attests to the preparations for a US-Iranian showdown involving Israel behind the words on Feb. 5 of US President Barack Obama (“I don’t think Israel has decided whether to attack Iran”) and Ayatollah Ali Khamenei on Feb. 3 (“The war itself will be ten times as detrimental to the US.”).

Monday, Feb. 6, the US president ordered the tightening of sanctions by freezing Iranian assets in America and blocking the operations of Iranian banks including its central bank.
US Rear Adm. Kevin Scott and Brig. Gen. Christopher Owens are coordinating the exercise over large stretches of coastal terrain in Virginia, North Carolina and Florida and Atlantic Ocean from the USS Wasp amphibian helicopter carrier. It is led by the USS Enterprise nuclear carrier with strike force alongside three amphibian helicopter carriers, the USS Wasp, the USS Boxer and the USS Kearsage. On their decks are 6,000 Marines, 25 fighter bombers and 65 strike and transport helicopters, mainly MV-22B Ospreys with their crews. Altogether 100 combat aircraft are involved.

The exercise is scheduled to end on February 14, a week before the winding up of the Iranian drill, after which the participants are to be shipped out to Persian Gulf positions opposite Iran. Altogether three American aircraft carrier strike groups, the French Charles de Gaulle carrier and four or five US Marines amphibian vessels will be posted there, debkafile’s military sources report.
On Feb. this site first disclosed a flow in unprecedented numbers of US military strength to two strategic islands, Yemeni Socotra and Omani Masirah, within range of the Strait of Hormuz and Iran.

US naval officials insist that the exercise has nothing to do with Iran, but the scenario is a giveaway. A mechanized division from the fictitious hostile country of Garnet (Iran) has invaded its neighbor, Amber (Saudi Arabia), which has asked for coalition assistance to halt the enemy’s northern advance. Garnet has already mined harbors (Hormuz) and established anti-ship missiles on its coastline.

Coalition forces are required to develop strategy for defeating the enemy and carry the combat onto its (Iranian) soil. Hence, the preponderance of amphibian Marines in the exercise. source -DEBKA