This is typical thinking of the rich, Marxist liberals who have one set of rules for the general population to live by, and another set of rules by which they exist. Europe right now, especially France and England are besieged by Islamic terror attacks because over the past 10 years they have allowed an uncheck and unvetted stream of immigrants to take up residence in their countries, create sleeper cells and then plan and execute terror attacks.

Pop megastar Katy Perry made an impassioned plea for people to “co-exist” and said that “barriers” or “borders” could detract from that goal in an interview following the terrorist bombing at an Ariana Grande concert in Manchester, U.K. on Monday night that claimed the lives of at least 22 people and injured dozens of others.

In an interview Tuesday on Elvis Duran and the Morning Show, the “Chained to the Rhythm” singer suggested that people “unite” following the tragedy, which occurred as young fans and their parents were leaving the 21,000-seat arena at around 10:35 p.m. local time.

“Whatever we say behind people’s backs, the Internet can be a little bit ruthless as far as fan bases go but I think that the greatest thing we can do is just unite and love on each other,” Perry said, adding, “No barriers, no borders, we all just need to co-exist.”

Hmm, does that strike you as odd in any way? It should. Katy Perry just purchased a new home in LA that sits behind massive security gates and rimmed with security fences in a secluded area. After calling for “no barriers or borders” for victims of Islamic terrorism, will she now be uninstalling the massive walls of protection in her new home? 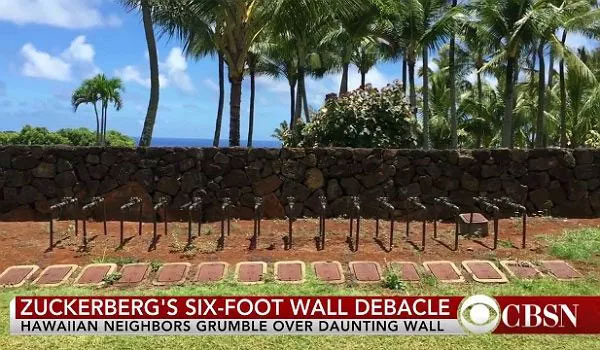 A few years ago, Facebook CEO Mark Zuckerberg and his wife went on vacation to the beautiful Hawaiian island of Kauai. Like many before him, he fell in love with the place.

Zuckerberg then reportedly spent $100 million to purchase 700 acres of land.

Some say the social media multi-billionaire isn’t being very neighbourly. He put up a wall surrounding the expansive property and he’s launched lawsuits against hundreds of Hawaiians who might have small claims to land within his new estate.

Now that’s funny because the Facebook CEO and cofounder expressed concern over Trump’s executive orders on immigration and refugees. “Like many of you, I’m concerned about the impact of the recent executive orders signed by President Trump,” Zuckerberg wrote in a Facebook post, which cited his family’s immigrant background and his volunteer work with undocumented schoolchildren.

“We should also keep our doors open to refugees and those who need help,” Zuckerberg wrote. “That’s who we are. Had we turned away refugees a few decades ago, Priscilla’s family wouldn’t be here today.”

This is typical thinking of the rich, Marxist liberals who have one set of rules for the general population to live by, and another set of rules by which they exist. Europe right now, especially France and England are besieged by Islamic terror attacks because over the past 10 years they have allowed an uncheck and unvetted stream of immigrants to take up residence in their countries, create sleeper cells and then plan and execute terror attacks.

Every, single rich celebrity Liberal out there has bodyguards, gates, walls, locks and all manner of security to keep them safe from their fans, yet at the same time rail against national security measures to protect citizens from Islamic terrorists. Their answer to the recent Manchester killing of innocents by Islamic terrorist Salman Abedi amounts to nothing more than pious words, teddy bears, candlelit vigils and #PrayForManchester hashtags.

Liberals want you to be docile, unarmed and unwilling to fight back and protect yourself, while they live behind locked gates.

It’s time to fight back, against both the terrorists and the Liberals.