Obama proudly told the audience that he would not back down in his efforts to make progress for the LGBT community, and called for all of them to remain... 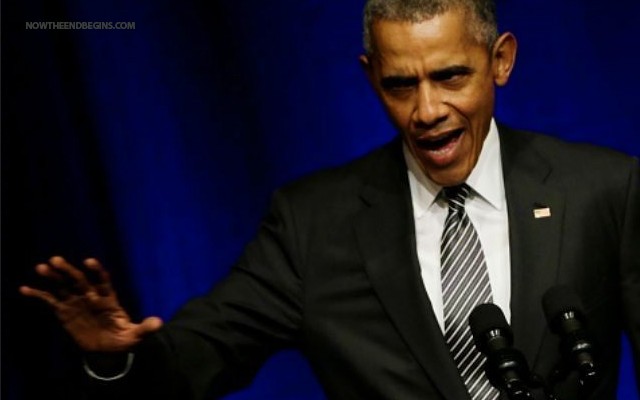 The fundraiser for the Democratic National Committee was specifically billed as an “LGBT gala” held in New York City in coordination with Obama’s trip to the United Nations Assembly.
by Geoffrey Grider September 28, 2015
NOW THE END BEGINS SHARE:

As Pope Francis flew back to Rome, President Obama issued a stern warning to Christians, warning them their attempts to assert their religious liberty to oppose gay rights would fail.

“And ye shall cry out in that day because of your king which ye shall have chosen you; and the LORD will not hear you in that day.” 1 Samuel 8:18 (KJV)

EDITOR’S NOTE: Obama’s war on Christianity continues unabated and with a newly-discovered sense of purpose and fervor. That Obama is not a Christian is painfully obvious to even the most casual observer. At every possible turn, he supports, funds and fosters legislation that spits in the face of the God of Abraham and the Holy Bible. Never in the history of America has there ever a been a president who was as anti-Christian as this president. This man is the very judgement of God upon us for rejecting Him as a nation, and as such, God has given us the king that we deserve.

“We affirm that we cherish our religious freedom and are profoundly respectful of religious traditions,” he insisted during a dramatic speech at a LGTB fundraiser in New York City on Sunday night, praising the progress made on gay rights under his administration. “But we also have to say clearly that our religious freedom doesn’t grant us the freedom to deny our fellow Americans their constitutional rights.”

The fundraiser for the Democratic National Committee was specifically billed as an “LGBT gala” held at Gotham Hall in New York City in coordination with Obama’s trip to the United Nations Assembly.

During his speech, Obama asserted that his administration was respecting what he described as “genuine concerns” of religious institutions but suggested that Republicans were using the issue just to earn more votes, as they did in 2004.

“America has left the leaders of the Republican Party behind,” he declared proudly.

He ridiculed Ben Carson for suggesting that “prison turns you gay” and added that another Republican candidate had boasted of his introduction of a constitutional amendment to ban same-sex marriage, likely referring to Sen.

“I’m sure he loves the Constitution — except for Article III,” Obama said mockingly. “And maybe the Equal Protection Amendment. And 14th Amendment, generally.”

Debbie Wasserman Shultz was in attendance at the fundraiser, and Star Trek’s George Takei also was expected to attend.

Obama proudly told the audience that he would not back down in his efforts to make progress for the LGBT community, and called for all of them to remain vigilant to hold the line on important legal gains in the country.

“What makes America special is, is that though sometimes we zig and zag, eventually hope wins out,” he said. “But it only wins out because folks like you put your shoulder behind the wheel and push it in that direction.” source