On 9/11 Anniversary 2,000 Islamic Terrorists Attack US Embassy In Cairo Egypt

Egyptian Islamic demonstrators climbed the walls of the U.S. Embassy in Cairo today and pulled down the American flag to protest a film that they say is insulting to... 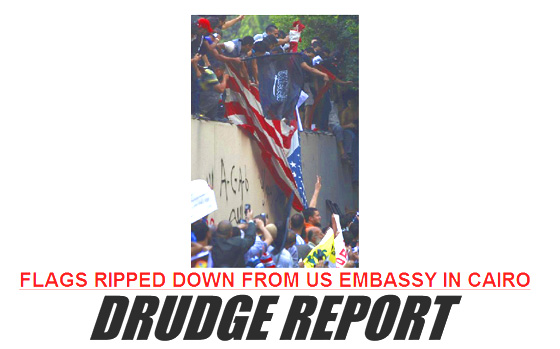 Egyptian demonstrators climbed the walls of the U.S. Embassy in Cairo today and pulled down the American flag to protest a film that they say is insulting to the Prophet Mohammad.

Update at 2:07 p.m. ET: CNN reports that U.S. security guards fired a volley off warning shots as the crowd gathered outside the embassy walls. CNN adds that the embassy had been expecting a demonstration and cleared all diplomatic personnel earlier from the facility.

Original post: The Associated Press reports that embassy officials say there was no staff inside at the time. Reuters reports that protesters tried to raise a black flag carrying the slogan: “There is no god but Allah and Mohammad is his messenger.”

The news agency says about 2,000 protesters have gathered outside the embassy and about 20 have scaled the walls.

The AP says the protesters were largely ultra conservative Islamists. Iran’s FARS news agency says the protest is aimed at a movie being produced by a group of “extremist” members of the Egyptian Coptic Church in the United States.

CNN says the film in question is a Dutch production.

The AP says clips of the film are available on YouTube show the prophet having sex and question his role as the messenger of God’s words.

After the protest, the U.S. Embassy issued this statement on its website:

The Embassy of the United States in Cairo condemns the continuing efforts by misguided individuals to hurt the religious feelings of Muslims as we condemn efforts to offend believers of all religions. Today, the 11th anniversary of the September 11, 2001 terrorist attacks on the United States, Americans are honoring our patriots and those who serve our nation as the fitting response to the enemies of democracy. Respect for religious beliefs is a cornerstone of American democracy. We firmly reject the actions by those who abuse the universal right of free speech to hurt the religious beliefs of other