The spooky incident happened on October 7, when Flight Engineers Reid Wiseman of NASA and Alexander Gerst of the European Space Agency conducted a spacewalk outside the International Space... 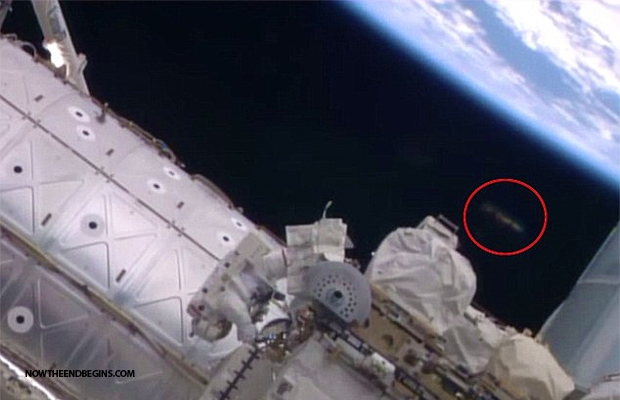 What is it? The astronaut is seen making the repairs in the center of the frame - while circled in red is the UFO
by Geoffrey Grider October 21, 2014
NOW THE END BEGINS SHARE:

A UFO photo-bombed astronauts making repairs to the International Space Station earlier this month – setting off a wild frenzy of speculation online.

The spooky incident happened on October 7, when Flight Engineers Reid Wiseman of NASA and Alexander Gerst of the European Space Agency conducted a spacewalk outside the International Space Station to fix an electrical problem.

In video shot by NASA and uploaded to YouTube last week, the UFO can be seen hovering just for a few seconds behind the astronauts, before the camera cuts to another angle. According to the Examiner one possible explanation for the UFO is that it could be one of two resupply craft that visited the ISS.

The Space X Dragon ship arrived at the ISS on September 23 and that space ship was followed up two days later by a Soyuz TMA 14M craft that brought three new crew members. However, both the craft are currently docked with the ISS and the UFO in the video appears not to be attached to the ISS.

A more likely explanation than a craft piloted by beings from another planet observing human astronauts is lens-flare. Light could easily have bounced off the ISS and refracted onto the camera.

But, observers have pointed out that there doesn’t seem to be a strong source of light near to the astronauts when the UFO is seen. This may rule out lensflare and keeps the object confirmed as a genuine UFO.