Defense Secretary Chuck Hagel plans to shrink the United States Army to its smallest force since before the World War II buildup and eliminate an entire class of Air... 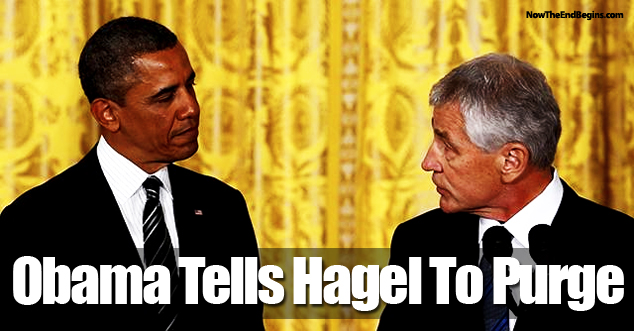 As Russia, Iran and China ramp up their defenses, Obama is telling the Pentagon to stand down.
by Geoffrey Grider February 24, 2014
NOW THE END BEGINS SHARE:

China and Russia are spending billions to augment their defenses, Iran has gone fully nuclear. What is Obama’s reaction to safeguard America’s safety? If you guessed “reduce the world’s greatest Army to Pre-WW II levels”, then YOU are the winner!

NY Times WASHINGTON — Defense Secretary Chuck Hagel plans to shrink the United States Army to its smallest force since before the World War II buildup and eliminate an entire class of Air Force attack jets in a new spending proposal that officials describe as the first Pentagon budget to aggressively push the military off the war footing adopted after the terror attacks of 2001.

As Russia, Iran and China ramp up their defenses, Obama is telling the Pentagon to stand down.

The proposal, described by several Pentagon officials on the condition of anonymity in advance of its release on Monday, takes into account the fiscal reality of government austerity and the political reality of a president who pledged to end two costly and exhausting land wars. A result, the officials argue, will be a military capable of defeating any adversary, but too small for protracted foreign occupations.

The officials acknowledge that budget cuts will impose greater risk on the armed forces if they are again ordered to carry out two large-scale military actions at the same time: Success would take longer, they say, and there would be a larger number of casualties. Officials also say that a smaller military could invite adventurism by adversaries.

Mr. Hagel’s plan would most significantly reshape America’s land forces — active-duty soldiers as well as those in the National Guard and Reserve.

Under Mr. Hagel’s proposals, the entire fleet of Air Force A-10 attack aircraft would be eliminated.

That would be the smallest United States Army since 1940. For years, and especially during the Cold War, the Pentagon argued that it needed a military large enough to fight two wars simultaneously — say, in Europe and Asia. In more recent budget and strategy documents, the military has been ordered to be prepared to decisively win one conflict while holding off an adversary’s aspirations in a second until sufficient forces could be mobilized and redeployed to win there. source – NY Times