The State Department today again refused to name the capital of Israel, even after being questioned by the press and even after the Democratic party (President Obama's party) voted... 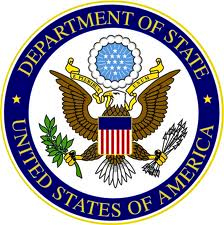 “And in that day will I make Jerusalem a burdensome stone for all people: all that burden themselves with it shall be cut in pieces, though all the people of the earth be gathered together against it.” Zechariah 12:3
The State Department today again refused to name the capital of Israel, even after being questioned by the press and even after the Democratic party (President Obama’s party) voted yesterday to add language to its platform stating that Jerusalem is the capital of Israel.

QUESTION: Which city does the U.S. Government recognize as the capital in the – Israel?

QUESTION: I mean, no city is recognized as a capital by the U.S. Government?

MR. VENTRELL: Again, I just stated our position, and it’s one we’ve said here many times before.

QUESTION: That means Jerusalem is not a part of Israel?

MR. VENTRELL: What it means is that the status of Jerusalem must be resolved in final status negotiations.

QUESTION: But you do have an Embassy in a city which is not Jerusalem.

MR. VENTRELL: Our Embassy is in Tel Aviv, and we have a Consulate General in Jerusalem.

QUESTION: Right. But I mean, if you have an Embassy, usually it’s in the capital; so therefore, it would appear that you believe that Tel Aviv is the capital.

MR. VENTRELL: What we believe is that the status of Jerusalem should be determined in final status negotiations between the two parties. And currently, our Embassy is in Tel Aviv.

QUESTION: What does the U.S. think the capital of Israel is? What do you —

MR. VENTRELL: As I’ve just said, we believe that the status of Jerusalem is an issue that should be resolved in final status —

QUESTION: I’m not asking you that question. I’m asking you what you think the capital is.

MR. VENTRELL: And my response is that Jerusalem is an issue that should be resolved in final status negotiations.

QUESTION: She didn’t ask about Jerusalem, though.

MR. VENTRELL: Look, this is something we’ve been through at this podium. Toria has been through it before. We’ve repeated it many times. You know that the position is. It hasn’t changed for decades.

QUESTION: Wait, I know that. And I don’t want to play the verbal game, I’m just very curious if you actually have a position about a capital of that country. And if you don’t, if – I just would like to hear you say you don’t.

MR. VENTRELL: — the situation is that we have an Embassy in Tel Aviv that represents our interests with the Government of Israel but that the issue of Jerusalem is one that has to be resolved between the two parties. That’s all I can say on this.

Anything else? Thank you. source – Weekly Standard