Well, Syria crossed Obama's "red line", and what is Obama doing about it? Nothing.... 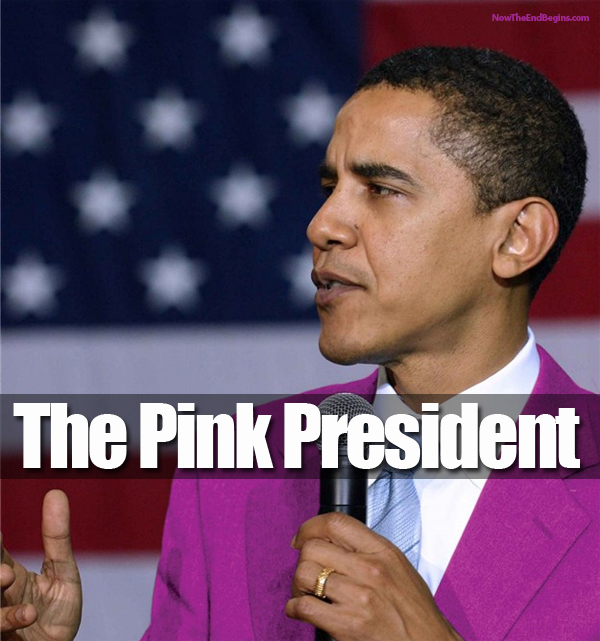 For someone known as the "first black president", its amazing how he is always associated with pink.
by Geoffrey Grider May 1, 2013
NOW THE END BEGINS SHARE:

When you think about the opposite of manly, virile presidents like Teddy Roosevelt and Ronald Reagan, Barack Obama wearing a pink blazer springs immediately to mind. He is pro-gay, pro-baby killing, pro-Muslim, pro-Islam, pro-no Second Amendment. So whenever he tries to talk tough it invariably backfires on him. Such is the case with Syria. Obama said a little while back that if “chemical weapons were used in Syria”, that that would be a “red line” being crossed and the United States would (finally) step in and do something about the slaughter that’s been happening there since March 2012.

Well, Syria crossed Obama’s “red line”, and what is Obama doing about it? Nothing.

From Fox News: President Obama, who earlier said use of chemical weapons by Syria on its people would be a “red line” requiring action by the U.S., walked the stance back on Tuesday, saying he needs more information on the reported attacks before responding.

Administration officials recently said intelligence analysts had “varying degrees of confidence” the embattled government of Syrian President Bashar Assad has gassed civilians with sarin. However, Obama said the administration is using all its resources to determine the facts about a weapon that he has said would be a “game changer” for U.S. policy in the war.

For someone known as the “first black president”, its amazing how he is always associated with pink.

“If we end up rushing to judgment without hard, effective evidence … we can find ourselves in a position where we can’t marshal the international community in support of what we do,” Obama said. “It’s important for us to do this in a prudent way.”

The administration long ago called for Assad to step down and pave the way for a new government. But Obama has resisted calls from some Republicans in Congress to send U.S. military aid to the rebels and perhaps commit U.S. military resources directly.

So far, the war, which began in March 2011, has claimed an estimated 75,000 lives. While the U.S. has backed the Syrian rebels with non-military aid, critics have said that the forces include Al Qaeda fighters and other insurgents unfriendly toward the U.S., leaving uncertainty surrounding Syria’s future under a post-Assad government.

Republican Sens. John McCain, Ariz., and Lindsey Graham, S.C., said the president must do more to end the conflict.

“It will not be long before Assad takes this delay as an invitation to use chemical weapons again on an even larger scale,” they said in a joint statement. “The president needs to lead. He needs to articulate exactly what outcome in Syria would best serve America’s national security interests.”

Obama made the remarks at a wide-ranging White House press conference in which he also answered questions about his signature health-care law, defended the FBI in its efforts to crack down on terrorism before the deadly Boston Marathon bombing and said he’d renew efforts to close the terrorist prison camp at Guantanamo Bay, Cuba.

Four months into his second term, Obama said he remains open-minded about the immigration legislation being hammered out by congressional lawmakers and that he would not support a bill that excludes a pathway to citizenship – a sticking point for most Democrats and a divisive issue for Republicans. Reforming the nation’s immigration system has been one of the president’s top legislative priorities this term.

Asked about the FBI’s investigation into a possible terrorist threat posed in the past by Tamerlan Tsarnaev, a suspect in the April 15 Boston Marathon bombings who died in an escape attempt, the president said, “Based on what I’ve seen so far, the FBI performed its duties, the Department of Homeland Security did what it was supposed to be doing.”

Obama also said he’d renew efforts to close Guantanamo Bay. His first-term campaign promise to shut down the terrorist camp has been met with strong objection from lawmakers who don’t want the prisoners transferred to American soil.

Asked about a hunger strike by some detainees, he said, “I don’t want these individuals to die.” The president also said the Pentagon was doing what it could to manage the situation.

Obama also noted that several suspected terrorists have been tried and found guilty in U.S. federal courts, a response to congressional critics who say the detainees must be tried in special courts if the United States is to maximize its ability to prevent future attacks.

On another contentious issue, the president said a variety of Republicans were working to foil the final implementation of the health care law he pushed through Congress three years ago.

He said GOP lawmakers want to repeal the law and some Republican governors don’t want to have their states participate in establishing insurance pools where the uninsured can find coverage. In other cases, Republican legislatures object when governors are willing to go along.

“We will implement” the law,  Obama said, though he conceded there will be glitches along the way. “Despite all the hue and cry and sky-is-falling predictions about this stuff, if you’ve already got health insurance, then the part of ObamaCare that affects you is already in place,” he said. source – Fox News