Obamacare made plenty of provision for "implantable devices", and not just for pacemakers. But until now, what would be "coming next" was an unknown entity. Now we know. Under... 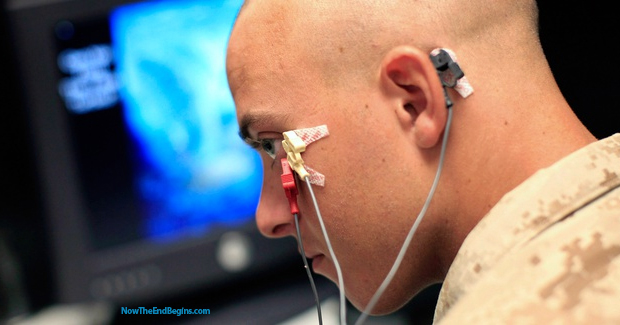 The chipping of Americans can now officially begin.

Obamacare made plenty of provision for “implantable devices”, and not just for pacemakers. But until now, what would be “coming next” was an unknown entity.

Have you been noticing that, over that past few years, military diagnosis of PTSD has skyrocketed? Do you know why that is? So they can justify using the US soldier as the guinea pig for launching microchip implants in humans. Under the guise of treating the all-covering diagnosis of PTSD, the Obama administration has instructed the Pentagon to begin the process of microchipping the brains of soldiers. Watch for diagnosis of PTSD to increase 1000%  past the current all-time high to justify mass microchipping.

Prediction: After the American public has accepted this as “standard medical treatment”, microchipping of all Americans for any reason will be as standard as taking your dog to the vet to be chipped. The below article from Defense One clearly states that this technology will be applied to “millions of Americans”. Read it for yourself and see.

We are in the very last stages of the death of a free America, and on the threshold of something truly terrifying.

Defense One – Now the Pentagon is developing a new, innovative brain chip to treat PTSD in soldiers and veterans that could bring sweeping new changes to the way depression and anxiety is treated for millions of Americans.

With $12 million (and the potential for $26 million more if benchmarks are met), the Defense Advanced Research Projects Agency, or DARPA, wants to reach deep into your brain’s soft tissue to record, predict and possibly treat anxiety, depression and other maladies of mood and mind. Teams from the University of California at San Francisco, Lawrence Livermore National Lab and Medtronic will use the money to create a cybernetic implant with electrodes extending into the brain. The military hopes to have a prototype within 5 years and then plans to seek FDA approval.

DARPA’s Systems-Based Neurotechnology for Emerging Therapies, or SUBNETs, program draws from almost a decade of research in treating disorders such as Parkinson’s disease via a technique called deep brain stimulation. Low doses of electricity are sent deep into the brain in somewhat the same way that a defibrillator sends electricity to jumpstart a heart after cardiac arrest. While it sounds high-tech, it’s a crude example of what’s possible with future brain-machine interaction and cybernetic implants in the decades ahead.

“DARPA is looking for ways to characterize which regions come into play for different conditions – measured from brain networks down to the single neuron level – and develop therapeutic devices that can record activity, deliver targeted stimulation, and most importantly, automatically adjust therapy as the brain itself changes,” DARPA program manager Justin Sanchez said.

SUBNETs isn’t the only military research initiative aimed at stimulating the brain with electricity. The Air Force has been studying the effects of low amounts of electricity on the brain by using a non-invasive interface (a cap that doesn’t penetrate into the skull.) The objective is to deliver a caffeine-like boost to help soldiers stay alert through long stretches of piloting or screen interaction. The current DARPA project stands out as uniquely ambitious in what it promises to reveal about the brain, in addition to stimulating it.

While neuroscientists are getting much better at using, understanding and harnessing the big electrical signals that emerge from the brain’s motor cortex, research that is rapidly contributing to much better prosthetic arms, they still don’t have a clear understanding of the way brain regions work in mood disorders associated with PTSD. We do know that anxiety ailments involve a delicate interplay of memory (in the physical form of synaptic connections) and stimuli and manifest across multiple brain areas. Furthermore, these responses and interactions can change as the very malleable brain itself adapts in unpredictable ways.

The World Begins To Embrace The Implantable RFID Microchip from Now The End Begins on Vimeo.

“Little is understood of how the brain’s neural circuitry relates to anxiety and other neuropsychiatric disorders. This project will seek to markedly improve that understanding by obtaining maps of the brain’s electrical activity at higher resolution than has been previously possible. The ultimate impact on the treatment of major depression, anxiety disorders, and other conditions remains to be seen, but a more clear understanding of the basis of these disorders is badly needed,” Edward Chang, a neuroscientist at the University of California at San Francisco told Defense One.

The device would record what happens when a subject transitions into a state of anxiousness or depression from a more normal frame of mind. Today, observing brain activity that fine requires a bulky brain-monitoring system like the moderately inconvenient but rather imprecise EEG cap to the much more robust magnetoencephalograph, MEG, which can take very detailed readings of magnetic brain activity millisecond by millisecond. But commonly available MEGreaders are enormous, require several gallons of liquid nitrogen to stay cool and can cost around $4 million.

​“There is really no comparison between the vast amount of data you can get from an invasive deep brain implant (i.e. you cut open the skull and put one of more wires deep inside) versus the smeared slow trickle of information you can get from anEEG cap outside the​ skull. Chronic fMRI gives much more data, but is practically impossible on any longer time scales (even hours) due to the cost of using the machine and the required immobility of the subject,” University of Arizona neuroscientist Charles Higgins told Defense One.

If the DARPA program is successful, it will yield new brain-monitoring capabilities that are exponentially cheaper smaller, more useful and that collect data when the patient is most likely to actually encounter traumatic stimuli, not just when he or she is in a lab-making data collection much easier and the data more useful.

“With existing technology, we can’t really record anxiety level inside the brain. We can potentially record adrenaline and cortisol levels in the bloodstream to measure anxiety. However, if a deep brain implant is to be used (as proposed in this project), it might be possible to monitor activity in the amygdala, and this would be a direct way of monitoring anxiety,” said Higgins.

Using that data, the researchers hope to create models and maps to allow for a more precise understanding of the electrical patterns in the brain that signal anxiety, memory loss and depression. The data from devices, when they come online, will be made available to the public but will be rendered anonymous, so records of an individual test subject’s brain activity could not be traced back to a specific person. source – Defense One