Mr Obama’s lack of a viable alternative foreign policy for the region has put world energy markets at risk. Obama's JV Team has turned All-Pro, he must be so... 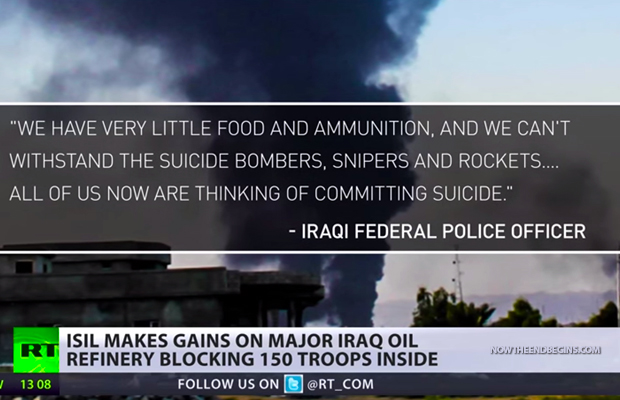 Thick black smoke rising from the Baiji oil refinery could be seen as a dirty smudge on the horizon as far away as Baghdad after fighters from ISIS set fire to the enormous processing plant just over 100 miles north of the capital last week.

The decision to torch the refinery, which once produced around a third of Iraq’s domestic fuel supplies, was made as the insurgents prepared to pull out of Baiji, which they captured last June in a victory that sent shock waves across world oil markets.

A year on from the start of the siege and a shaky alliance of the Middle East’s major Arab powers, with the limited support of the reluctant US government, has failed to contain the expansion of ISIS.

Obama’s JV Team has turned All-Pro, he must be so proud.

According to Daniel Yergin, the energy expert and vice-chairman of IHS, the business information provider, the biggest threat to oil prices is the political chaos that threatens to engulf the Middle East, combined with the West’s reluctance to intervene.

Speaking to The Sunday Telegraph, Mr Yergin argued that the price of a barrel of oil could skyrocket to levels above $100 per barrel if Isil is allowed to press deeper into Iraq, the second-largest producer in the cartel after Saudi Arabia.

“ISIS represents a whole new reality for the region, which just isn’t reflected in the oil market at the moment,” said Mr Yergin. “It’s an increasingly grave situation for most of Opec and the Middle East. At some point the security issues will start to come back into the price of oil.”

Against this cataclysmic backdrop of bombs falling in Sana’a and with ISIS literally at the gates of the major Iraqi city of Ramadi, many US energy and security experts were shocked to hear President Barack Obama ignore the danger in a recent keynote speech in which he pinpointed global warming as an equally big risk for Americans.

“Climate change constitutes a serious threat to global security, an immediate risk to our national security,” warned Mr Obama in a speech that many have criticised as symptomatic of the administration’s desire to disengage from the region which still provides a significant share of its oil.

Despite the growing focus on climate change and the campaign to limit fossil fuel production, ISIS will be a bigger concern for the majority of oil ministers around Opec’s table next week.

FLASHBACK 2012: In the 2012 campaign, Obama spoke not only of killing Osama bin Laden; he also said that Al Qaeda had been “decimated.” I pointed out that the flag of Al Qaeda is now flying in Falluja, in Iraq, and among various rebel factions in Syria; Al Qaeda has asserted a presence in parts of Africa, too. “The analogy we use around here sometimes, and I think is accurate, is if a jayvee team puts on Lakers uniforms that doesn’t make them Kobe Bryant,” Obama said, resorting to an uncharacteristically flip analogy. source

The Obama administration’s reluctance to intervene marks the end of a US policy to protect the region’s oil which has remained in existence since President Franklin D Roosevelt first met with modern day Saudi Arabia’s founder King Abdulaziz in 1945. It was this commitment that drew America into the first Gulf War in 1991 and again in 2003 when it decided to bring down the curtain on Saddam Hussein’s regime.

However, Mr Obama’s lack of a viable alternative foreign policy for the region has put world energy markets at risk. source