If President Obama’s goal with the inaugural prayers was to marginalize and offend devout, conservative Christians and orthodox Jews, it would be fair to say: mission accomplished.... 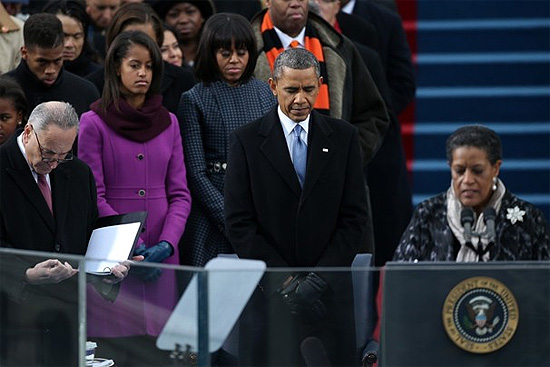 The spirit in the sky

If President Obama’s goal with the inaugural prayers was to marginalize and offend devout, conservative Christians and orthodox Jews, it would be fair to say: mission accomplished.

The choice of Myrlie Evers-Williams, widow of slain civil rights leader Medgar Evers, departed from historical protocol. She was the first female and first non-clergy member to lead an inaugural prayer. She did so in the wake of Pastor Louie Giglio’s unceremonious removal from the dais after the discovery he had preached a sermon 20 years ago expositing the Bible’s position on homosexuality.

While it’s understandable that Evers-Williams would feel the need to temper her prayers, lest the current administration banish her from future public speaking engagements, her words represent a stunning departure from historical inaugural prayers and from anything resembling a Christian, Jewish, or even a generic Judeo-Christian prayer.

Evers-Williams, when asked to describe her religious affiliation by Religion News Service, said,

The answer seems rather dodgy, but nothing out of the ordinary, so when her “prayer” began as something of an announcement, we waited for the “prayer” part to begin:

America, we are here, our nation’s Capitol on this January the 21st 2013, the inauguration of our 45th [editor’s note, should be 44th] president Barack Obama.

And we waited some more…

Was this a prayer or a speech? If it was a prayer, note that Mrs. Evers-Williams addressed it simply to “America,” imploring “America” to bestow blessings upon our leaders and our country. source – PJMedia

Editor’s Note: In all fairness she closed her prayer with “and in the Jesus name”, which was funny because she never addressed her prayer to Him, or the God the Father. But she did keep talking about “some kind of spirit”.