Gun retailers say the Obama administration is trying to put them out of business with regulations and investigations that bypass Congress and choke off their lines of credit, freeze... 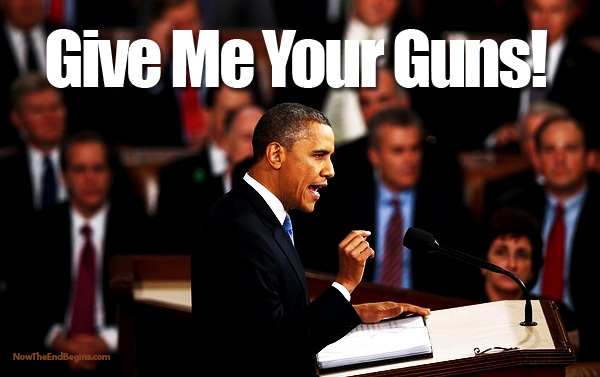 Without the Second Amendment, there is no First Amendment. Think about that...
by Geoffrey Grider May 20, 2014
NOW THE END BEGINS SHARE:

Obama’s plan to regulate gun shop owners out of business

Gun retailers say the Obama administration is trying to put them out of business with regulations and investigations that bypass Congress and choke off their lines of credit, freeze their assets and prohibit online sales.

Without the Second Amendment, there is no First Amendment. Think about that…

Meanwhile, the Justice Department has launched Operation Choke Point, a credit card fraud probe focusing on banks and payment processors. The threat of enforcement has prompted some banks to cut ties with online gun retailers, even if those companies have valid licenses and good credit histories.

“This administration has very clearly told the banking industry which customers they feel represent ‘reputational risk’ to do business with,” said Peter Weinstock, a lawyer at Hunton & Williams LLP. “So financial institutions are reacting to this extraordinary enforcement arsenal by being ultra-conservative in who they do business with: Any companies that engage in any margin of risk as defined by this administration are being dropped.”

A Justice Department representative said the agency is conducting several investigations that aim to hold accountable banks “who are knowingly assisting fraudulent merchants who harm consumers.”

“We’re committed to ensuring that our efforts to combat fraud do not discourage or inhibit the lawful conduct of these honest merchants,” the Justice Department said in a May 7 blog post.

But gun retailers say their businesses are being targeted in the executive branch’s efforts:

An explanatory email from the bank said: “This letter in no way reflects any derogatory reasons for such action on your behalf. But rather one of industry. Unfortunately your company’s line of business is not commensurate with the industries we work with.”

• Black Rifle Armory in Henderson, Nevada, had its bank accounts frozen this month as the bank tried to determine whether any of Black Rifle’s online transactions were suspicious.

• In 2012, Bank of America suddenly dropped the 12-year account of McMillan Group International, a gun manufacturer in Phoenix, even though the company had a good credit history, the owner said. Gun parts maker American Spirit Arms in Scottsdale, Arizona, received similar treatment by Bank of America, the country’s largest banking institution.

“This seems to be happening with greater frequency and to many more dealers,” said Joe Sirochman, owner of American Spirit Arms. “At first, it was the bigger guys — gun parts manufacturers or high-profile retailers. Now the smaller mom-and-pop shops are being choked out, and they need their cash to buy inventory. Freezing their assets will put them out of business.”

After McMillan Group owner Kelly McMillan publicized Bank of America’s action on his Facebook account, he found that thousands of small gun-shop owners across the country were in the same situation. Banks were either dropping them, freezing their accounts or refusing to process their online sales, so he opened a credit card processing company for the gun industry called McMillan Merchant Solutions.

“Four generations of my family have been in this industry. This is my way to give back,” said Mr. McMillan, adding that many of his customers were denied banking access because of the nature of their business. “This is an attempt by the federal government to keep people from buying guns and a way for them to combat the Second Amendment rights we have. It’s a covert way for them to control our right to manufacture guns and individuals to buy guns.” source – Washington Times