Charles Krauthammer said on Fox News tonight that amnesty via executive order is an "impeachable offense."... 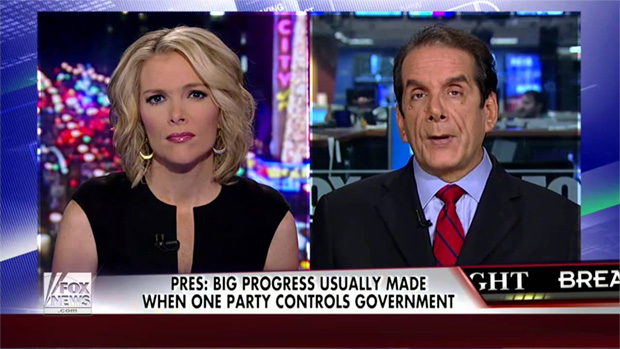 “Look, I believe it is an impeachable offense,” Krauthammer told Kelly.

Charles Krauthammer said on Fox News tonight that amnesty via executive order is an “impeachable offense.”

“If the circumstances were different, if we were at the beginning of a presidency, if we hadn’t had years when the Congress has been supine and unresponsive at other grabs of their authority by the executive–like Obama unilaterally changing Obamacare after it was passed about 30 times with no response from the Congress–the same as Obama essentially re-writing some of the drug laws.

“This idea of prosecutorial discretion is really a travesty. It is intended for extreme cases. For a case where you want to show mercy for an individual or two where it’s unusual incident, unusual circumstances and you say, okay, we’re going to give this person a pass. It was never intended to abolish a whole class of people subject to a law and to essentially abolish whole sections of a law. And that’s exactly what’s happening here.”