The fact that the Obama would endorse an Islamic supremacist to be the “Grand Imam” at a jumah in Charlotte is another example of how blind and politically correct... 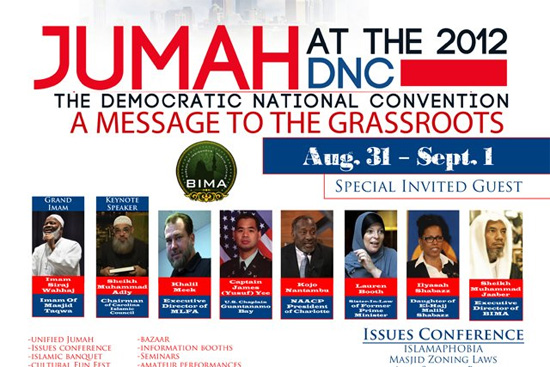 Wahhaj warned the United States that it is doomed to fall unless it “accepts the Islamic agenda.”
by Geoffrey Grider August 25, 2012
NOW THE END BEGINS SHARE:

The Democratic National Convention is endorsing a political platform for the organizers of a program called the “Jumah at the DNC.” It begins with a jummah prayer on Friday, August 31 and ends on September 2, 2012

RELATED STORY: A Factual Comparison Of Similarities Between Obama And Hitler

Wahhaj warned the United States that it is doomed to fall unless it “accepts the Islamic agenda.” “You know what this country (USA) is? It’s a garbage can. It’s filthy.”

On the surface it appears that the event, organized by the Bureau of Indigenous Muslim Affairs (BIMA), is cultural fun for the whole family whose only political focus is Muslims’ right to assembly, but it is much more than that. 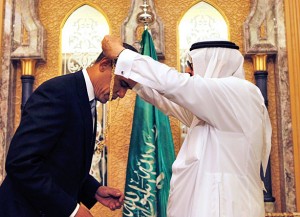 The DNC lists the assembly as an “official function” and claims that the leaders of the program are typical of the DNC community. The group is hardly “mainstream,” being represented by Siraj Wahhaj, who will be the “Grand Imam” for the gathering.

Wahhaj rose to prominence on the Muslim speaking circuit after he became the first Muslim to give an invocation to the United States Congress. Following 9/11, his fame as a moderate Muslim increased when he stated, “I now feel responsible to preach, actually to go on a jihad against extremism.”

The reality of Wahhaj’s efforts is not as moderate as the image he projects, however.

Wahhaj and the co-leader of the Charlotte event, Jibril Hough, are both heavily involved in the separatist American Islamist movement. Many of the participants in the “Jumah at the DNC” will most likely represent radical networks that have long-time, but little-known, operations in the Charlotte region.

There are two forms of lying that are permitted in Islam under certain circumstances, taqiyya and kitman.  Such circumstances are typically those that advance the cause of Islam – in some cases by gaining the trust of non-believers in order to draw out their vulnerability and defeat them.

Basically, taqiyya is lying by saying something that isn’t true.

Charlotte’s jumah will be a prime example of taqiyya. It will use the convention as cover for “town hall” activities designed to create awareness of the victimization of Muslims and Islamophobia. The Obama Administration’s pandering to Muslims will add considerable strength to the gathering and its agenda.

According to the schedule for the jummah prayer, a protest will be directed at the Patriot Act, the NYPD, and the fear of Islamophobia. For example, the “Anti-Sharia” issue will be represented as a bigoted restriction against the religious freedom of Muslims. Case in point is the current controversy in the U.S. Court of Appeals for the Armed Forces over the court-martial of Ft. Hood mass-killer Maj. Nidal Hasan, who has demanded the right to have a beard.

While some may insist that Wahhaj is a “moderate” Muslim, consider that he was designated as a “potential unindicted co-conspirator” in the World Trade Center bombing in 1993. Not only did Wahhaj escort the Blind Sheikh, Omar Abdel Rahman, around New York City and New Jersey, he also welcomed him at his mosque in Brooklyn, where Rahman gave an “inspired” lecture.

Rahman is currently serving a life sentence for his participation in the first World Trade Center bombing as well as other jihadist plots to blow up the Lincoln and Holland Tunnels.

Even if the association between Wahhaj and Rahman is not by itself evidence of Wahhaj’s extremism, the imam’s own words are enough to indict him.

At a solidarity speech in 1995, Wahhaj informed the world that it was his “duty and our duty as Muslims to replace the U.S. Constitution with the Quran.”

On another occasion Wahhaj commented, “if only Muslims were clever politically, they could take over the United States and replace its constitutional government with a caliphate.”

At another time he warned the United States that it is doomed to fall unless it “accepts the Islamic agenda.”

And finally, this: “You know what this country (USA) is? It’s a garbage can. It’s filthy.”

Moderate? You be the judge. And his appearance in Charlotte is endorsed by the DNC.

What is so disheartening about the so-called “Jumah at the DNC” is that it has thus far gone unnoticed or ignored by the mainstream press. The lack of notice demonstrates a lack of awareness of the dangers of jihad in this country. We trade awareness for hand wringing and soul searching after the fact — after the Twin Towers have fallen to the ground, when it is too late.

The fact that the DNC would endorse an Islamic supremacist to be the “Grand Imam” at a jumah in Charlotte is another example of how blind and politically correct we have become as a nation.

A hurricane may disrupt the Republicans in Tampa, but the storm winds may be even stronger when the Democrats hit Charlotte. source – Washington Times