The Department of Homeland Security (through the U.S. Army Forces Command) recently retrofitted 2,717 of these ‘Mine Resistant Protected’ vehicles for service on the streets of the United States.... 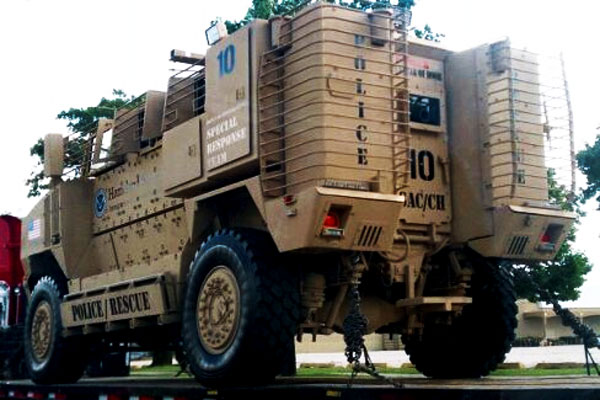 This is getting a little creepy.
According to one estimate, since last year the Department of Homeland Security has stockpiled more than 1.6 billion bullets, mainly .40 caliber and 9mm.

The Department of Homeland Security (through the U.S. Army Forces Command) recently retrofitted 2,717 of these ‘Mine Resistant Protected’ vehicles for service on the streets of the United States.

Although I’ve seen and read several online blurbs about this vehicle of late, I decided to dig slightly deeper and discover more about the vehicle itself.

The new DHS sanctioned ‘Street Sweeper’ (my own slang due to the gun ports) is built by Navistar Defense (NavistarDefense.com), a division within the Navistar organization. Under the Navistar umbrella are several other companies including International Trucks, IC Bus (they make school buses), Monaco RV (recreational vehicles), WorkHorse (they make chassis), MaxxForce (diesel engines), and Navistar Financial (the money arm of the company). source – Gateway Pundit