On July 31, 2013, Imam Talib Shareef of Masjid Muhammad in Washington, D.C., opened a session of the United States Congress with a prayer on Capitol Hill. This is... 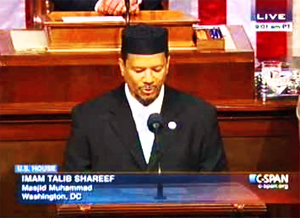 One nation under Allah

On July 31, 2013, Imam Talib Shareef of Masjid Muhammad in Washington, D.C., opened a session of the United States Congress with a prayer on Capitol Hill. This is the America that Obama has been working so hard to create.

This is the mission statement of the mosque where Talib Shareef is from:

“To be a model, productive, involved Islamic community, noticeably contributing to the growth, solutions, and betterment of D.C. and the National Capitol Region, with establishments in religion, education and training, health and human services, housing for general and senior member care, neighborhood excellence, etc., embracive of all people, as a community that G-d established, exemplifying the universal teachings and life example of Prophet Mohammed (SAW), as taught by Imam W. Deen Mohammed (RA).”