“We at Washington National Cathedral are striving to send a message of love and affirmation, especially to LGBT youth who suffer daily because of their gender identity or sexual... 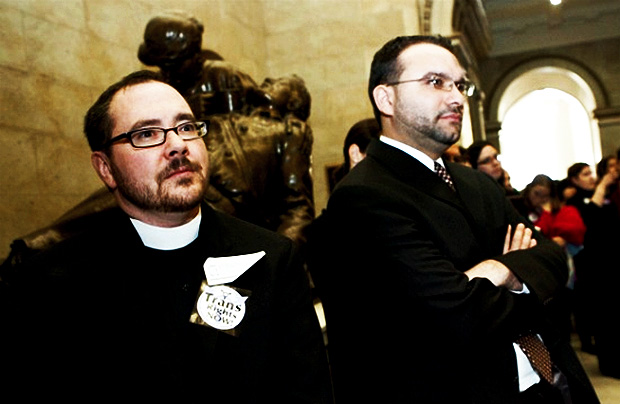 One of the ploys of the LGBT Mafia as they continue their juggernaut to seize control of America’s churches is that they say that “we are all created in God’s image”, thereby attempting to justify their perverse lifestyle. But the bible says exactly the opposite. When Adam and Eve sinned and lost the image of God in the Garden, the children that they produced were created in their own fallen image. Not in the image of God. We read this in Genesis 5:3:

“And Adam lived an hundred and thirty years, and begat a son in his own likeness, after his image; and called his name Seth:” Genesis 5:3

Every single one of us born since then has been created in Adam’s image, as Genesis so plainly declares. This is why Jesus tells Nicodemus in John 3:3 that he needed to become “born again”. His first birth – our first birth – is no good. God did not create the homosexual,  He created Adam and Eve who passed unto us the stain of sin. Homosexuality is a sin that needs to be washed away in the shed blood of Jesus Christ like every other sin when the person becomes born again.

“Jesus answered and said unto him, Verily, verily, I say unto thee, Except a man be born again, he cannot see the kingdom of God.” John 3:3

The Washington Times reports that  the Washington National Cathedral is welcoming the first openly transgendered Episcopal priest to its altar this month. The Rev. Cameron Partridge, a transgendered man, is set to give the June 22 sermon at the cathedral, a fixture in the D.C. skyline and one of the nation’s most well-known houses of worship.

Mr. Partridge is the Episcopal chaplain at Boston University and a lecturer and counselor for Episcopal and Anglican students at the Harvard Divinity School. He completed his transition to male in 2001, according to Boston University, and has a wife and two children.

“We at Washington National Cathedral are striving to send a message of love and affirmation, especially to LGBT youth who suffer daily because of their gender identity or sexual orientation,” Mr. Hall said. “We want to proclaim to them as proudly and unequivocally as we can: Your gender identity is good and your sexual orientation is good because that’s the way that God made you.”

Rev. Hall also announced that the Right Rev. Gene Robinson, the first openly gay Episcopal priest, would be presiding the same service with Mr. Partridge. He retired from his post as a bishop in New Hampshire and now works at the Center for American Progress.

The service caps two weeks of LGBT advocacy for the cathedral. It participated in this year’s Capital Pride events, and Mr. Hall said the service would include readings by local LGBT community members. Last year the National Cathedral made headlines when its leaders announced that the church would perform same-sex marriages.