With drones, we have arrived at a moment when it is technologically possible to engage in constant mass aerial surveillance... 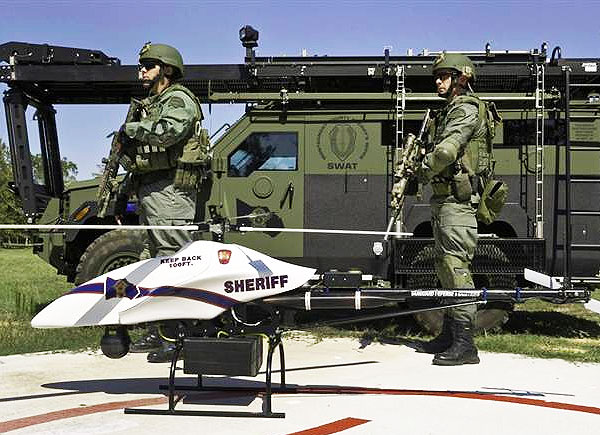 At a quick glance, it's nearly impossible to tell if this is an invading military force or the SWAT team from sheriff’s department in Montgomery County, Texas...is there a difference?
by Geoffrey Grider March 25, 2013
NOW THE END BEGINS SHARE:

When a fire broke out in a church in Mesa County, Colo., in September 2011, the police department was ready with its flight team. Strapping a thermal camera to a Draganflyer X6, they flew the drone above the burning building. Together, police and firemen identified hotspots in the structure, and traced the direction in which the fire was spreading.

At a quick glance, it’s nearly impossible to tell if this is an invading military force or the SWAT team from sheriff’s department in Montgomery County, Texas…is there a difference anymore?

In 2010, a 5-pound Marcus drone was loaned to forest rangers in West Virginia by University Cincinnati researchers, in order to monitor a controlled burn. Now the group is developing an unmanned system to help control wildfires.

“With drones, we have arrived at a moment when it is technologically possible to engage in constant mass aerial surveillance,” the ACLU’s Jay Stanley told NBC News. But don’t surveillance cameras do some of that already? “We don’t like those either,” Stanley added, “But I think that drones raise the stakes considerably from there.” source – MSNBC

Drones across America a reality

Despite Americans’ concerns about the domestic use of drones, California local agencies are reportedly moving forward with an application to declare a broad swath of Southern California a “drone zone” – an area to be used to test pilotless aircraft. The purpose: government stimulus.

In California, the San Diego Military Advisory Council (SDMAC) and the San Diego Regional Economic Development Corporation (EDC) have filed an application with the Federal Aviation Administration to create a drone zone. These groups want to stimulate state drone business, even as the state raises its taxes repeatedly, driving out other business. Northrup Grumman, a major drone producer, has relocated branches of its unmanned aerial vehicle (UAV) program to Southern California. General Atomics Aeronautical Systems, which produces Predator drones, is located in Poway. The UAV industry in San Diego County clocks in at approximately $1.3 billion, and that number is growing fast.

And it’s not just California

The FAA is prepared to greenlight six test zones across the country, and over 40 applications have been filed or will be filed shortly, according to the San Diego Union-Tribune. Applicants include the State Department, the Ohio Department of Transportation, the National Institute of Standards and technologies, and the Grand Forks Sheriff’s Department. The winners of this drone zone sweepstakes will be able to claim a chunk of what may be a $10 billion industry. Senator Harry Reid’s office says he pushed the FAA program that laid the groundwork for the drone zones. “We had Nevada in mind,” said Reid’s spokeswoman to the Las Vegas Sun. But the zones are bipartisan-approved: Gov. Brian Sandoval (R-NV) is apparently working with Reid and the FAA to try to grab one of the zones. source – Breitbart