Obama The ‘Technology President’ Is Unable To Operate An iPhone

When White House trip director Marvin Nicholson handed the president his personal iPhone, Mr. Obama couldn't get it to work. A reporter who witnessed the scene said the president... 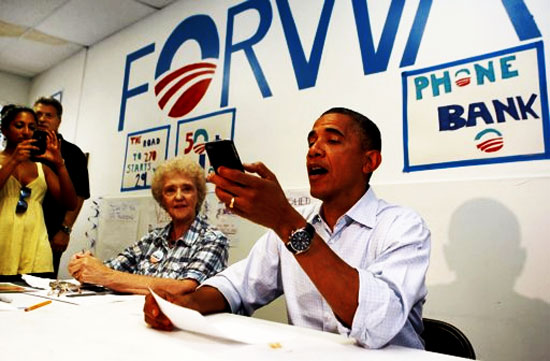 Confused and out of touch is Obama as he attempts and fails to make a simple call on an iPhone.
by Geoffrey Grider September 10, 2012
NOW THE END BEGINS SHARE:

On the campaign trail, President Obama is constantly talking about the importance of technology, but he met his match in an iPhone Sunday.

Confused and out of touch is Obama as he attempts and fails to make a simple call on an iPhone.

The president had stopped at a campaign office in Port St. Lucie, Fla., to thank volunteers. Then, for the cameras, Mr. Obama was supposed to call two campaign workers who were out working on his behalf.

But when White House trip director Marvin Nicholson handed the president his personal iPhone, Mr. Obama couldn’t get it to work. A reporter who witnessed the scene said the president looked “befuddled.”

“It’s not clear he knows how to dial on an iPhone,” the reporter wrote in a pool report.

The president then “had a little more trouble dialing,” the pool report said.

The president then has more trouble dialing. When the call didn’t go through, he blamed Mr. Nicholson for having an insufficient cell phone plan.

A volunteer called out, “I’ll give you my phone, call my wife.”

“I’ll call her and tell her that you’re messing around here in the office, giving the president ….” Mr. Obama said, his voice trailing off.

Someone handed him another iPhone. He successfully dialed the volunteer this time, but the man didn’t answer. Mr. Obama left a message. He eventually reached both volunteers, although one of them apparently didn’t believe it was the president calling.

“I just want to point out, this volunteering is not as easy as it looks,” Mr. Obama said. source – Washington Times