After 2 and one half years of telling the Palestinians that they should have their own state, Obama now tells them they can't. Let's see how well that plays... 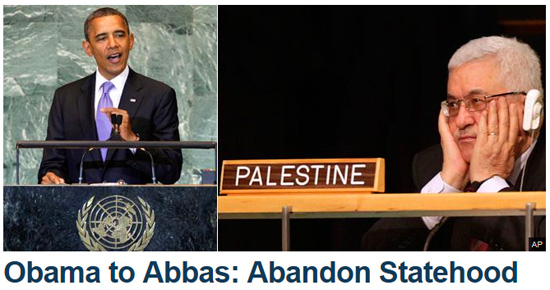 After 2 and one half years of telling the Palestinians that they should have their own state, Obama now tells them they can’t. Let’s see how well that plays out.

President Obama speaks during the 66th session of the General Assembly at United Nations headquarters Sept. 21.

“Peace will not come through statements and resolutions at the United Nations — if it were that easy, it would have been accomplished by now,” said Obama, who at the same forum a year ago called for an independent Palestine.

He said the decades-old impasse will be resolved only by “negotiated settlement,” something he said could not happen until “each side learns to stand in each other’s shoes.” Obama, while stating the vision of Palestinian statehood has been delayed for “too long,” used his address to assure Israel that his administration empathizes with its concerns and will stand by the Jewish state.

“Let us be honest with ourselves. Israel is surrounded by neighbors that have waged repeated wars against it,” Obama said. While Palestinians must know the territorial basis for their state, he said, the Israelis have be assured of their security.

“Ultimately, it is the Israelis and the Palestinians, not us, who must reach agreement on the issues that divide them,” Obama said.

The speech was just one element of the administration’s pressure campaign, in public and behind the scenes, to head off the vote on Palestinian statehood.

The president met after his address with Israeli Prime Minister Benjamin Netanyahu, to be followed by a meeting hours later with Palestinian Authority President Mahmoud Abbas. The two foreign leaders, who have not agreed to meet with each other, are on a collision course at the United Nations, requiring U.S. officials to intervene in a bid to ratchet down the dispute.

Abbas has threatened to bring his statehood push before the U.N. Security Council. The U.S. plans to veto the measure but would rather not get to that point, as the veto could further hurt U.S. standing in the Middle East. Still, Abbas could take the proposal straight to the General Assembly, where the Palestinians are seen as having the support to win what amounts to a symbolic recognition of statehood and slightly elevated status within the United Nations.

The White House, and the Israelis, maintain that the Palestinians cannot achieve statehood in any practical sense through a U.N. vote in New York. They say statehood can only be achieved through direct negotiations.

But Obama’s efforts to once again revive those negotiations have fizzled over the past year. Texas Gov. Rick Perry, the leading candidate in the Republican field for the presidential nomination, on Tuesday sharply criticized Obama for his Middle East policy. Referencing the president’s criticism of Israeli settlements and public call for a return to the pre-1967 borders, Perry blamed the president for the current situation at the U.N.

Obama said Wednesday he was “frustrated” by the lack of progress over the past year.

During his speech, Obama also hailed what he called a “time of extraordinary transformation,” as he touted the Arab Spring gains of protesters across the Middle East.

He particularly highlighted the NATO-led mission in Libya to aid rebels fighting against Muammar Qaddafi. “This is how the international community is supposed to work,” Obama said. He said uprisings in Egypt and Tunisia, as well as the resolution to an election dispute in Cote d’Ivoire, are signs of a changing world.

“This has been a remarkable year,” Obama said. “Something’s happening in our world. The way things have been is not the way they will be. … Dictators are on notice.” He said the international community will still “have to respond to the calls for change” elsewhere in the region, pointing to the repressive behavior of regimes in Syria and Iran, among others. source – Fox News