President who vowed to end war, now seeks sweeping power to expand it to pursue the Islamic State terrorists wherever and however he deems necessary... 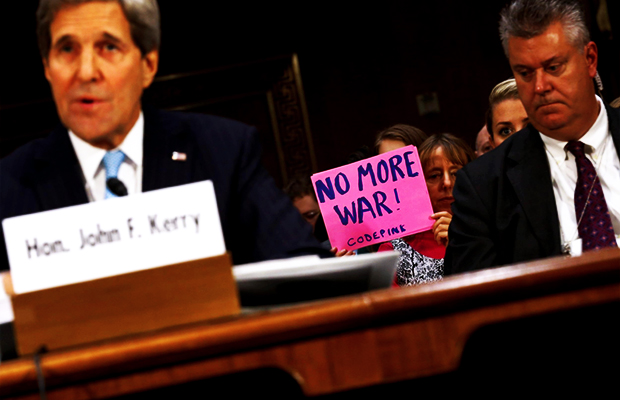 President who vowed to end war, now seeks sweeping power to expand it

Secretary of State John F. Kerry told Congress Tuesday that President Obama wants expansive war powers to pursue the Islamic State terrorists wherever and however he deems necessary, stunning lawmakers by requesting a war authorization that would even allow the Pentagon to commit American combat troops to the fight.

Though Mr. Obama doesn’t want combat troops, he won’t have Congress tie his hands against unforeseen directions the war could take should the Islamic State evolve, expand its fight to other countries or prove more difficult to rout, Mr. Kerry said.

Mr. Kerry was deployed to try to quell a growing furor over the administration’s approach, but his appearance didn’t appear to help, with lawmakers of both parties saying the White House appears to be trying to delay Congress from acting while doing little to step up on its own.

“The reason we’re here is a total failure of the president to lead on this issue,” said Sen. Bob Corker, the ranking Republican on the committee.

Mr. Obama has repeatedly refused requests to propose his own war resolution. Mr. Kerry said he didn’t think it mattered who goes first.

Read the rest of the story on The Washington Times…