The White House is signing off on a controversial new law that would authorize the U.S. military to arrest and indefinitely detain alleged al Qaeda members or other terrorist... 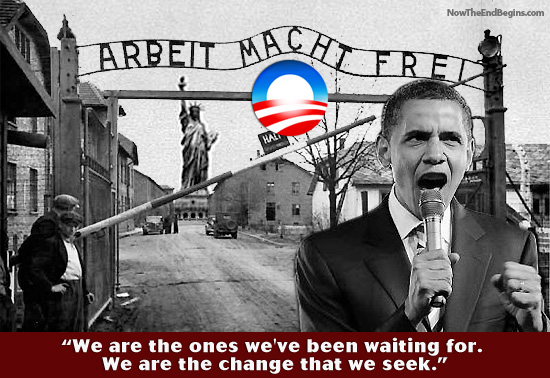 He has kept his campaign promise. America has been forever changed,
by Geoffrey Grider December 16, 2011
NOW THE END BEGINS SHARE:

We told you it was coming

Last year, we told you how Obama was planning to create concentration camps for American citizens. We laid out his plan in great detail. The below story from CBS News show you that today, Obama is ready to sign into law authorization for create a concentration camp that will hold, without charges and for an unspecified period of time, any American citizen that the US government deems to be a ‘terror threat’. You will have no right to a lawyer, no right to know the charges brought against you, and there will be no chance you will be released. This is the change you voted for in 2008.

He has kept his campaign promise. America has been forever changed,

“The White House is signing off on a controversial new law that would authorize the U.S. military to arrest and indefinitely detain alleged al Qaeda members or other terrorist operatives captured on American soil.

As the bill neared final passage in the House of Representatives and the Senate on Wednesday, the Obama administration announced it would support passage of the National Defense Authorization Act (NDAA), which contains slightly watered-down provisions giving the military a front line role in domestic terrorism cases.

The administration abandoned its long-held veto threat due to changes in the final version of the bill, namely that in its view, the military custody mandate has been “softened.” The bill now gives the President the immediate power to issue a waiver of the military custody requirement, instead of the Defense Secretary, and gives the President discretion in implementing these new provisions.

“We have concluded that the language does not challenge or constrain the President’s ability to collect intelligence, incapacitate dangerous terrorists, and protect the American people, and the President’s senior advisors will not recommend a veto,” the White House statement said.

The detainee provisions are just one part of the annual NDAA authorizing $662 billion in federal defense spending next year.

While the bill never expanded the authority to detain American citizens indefinitely without charges, proponents said the legislation would codify court decisions finding the President does have the authority to declare “enemy combatants,” as commander-in-chief and under the post-9/11 Authorization for Use of Military Force against al Qaeda and its allies. The administration, which has pledged not to use this power, believes the bill leaves this legal issue unresolved.

“By signing this defense spending bill, President Obama will go down in history as the president who enshrined indefinite detention without trial in U.S. law,” said Kenneth Roth, executive director of Human Rights Watch. “In the past, Obama has lauded the importance of being on the right side of history, but today he is definitely on the wrong side.”

“My concern is that you don’t want FBI agents and the military showing up at the same time, with some uncertainty” as to who has control, Mueller said, and raised this hypothetical example: “A case that we’re investigating on three individuals, two of whom are American citizens and would not go to military custody and the third is not an American citizen and could go to military custody?”

Mueller was joined earlier in the detainee debate by Defense Secretary Leon Panetta and Director of National Intelligence James Clapper in opposing the military custody provision, because they said it might inhibit flexibility by counter-terrorism professionals, restrain federal, state, and local law enforcement authorities, and risk losing the cooperation of terror arrestees.

“If President Obama signs this bill, it will damage both his legacy and American’s reputation for upholding the rule of law,” said Laura Murphy, director of the ACLU Washington Legislative Office. “The last time Congress passed indefinite detention legislation was during the McCarthy era, and President Truman had the courage to veto that bill.”

Bill opponents have noted that in the decade since the 9/11, the government has successfully convicted over 300 people for terrorism-related crimes, including thwarted plots to bomb passenger jets, subway lines, and landmarks such as Times Square and the Sears Tower.

By comparison, the military justice system, although stymied by constitutional challenges, has completed only six cases in Guantanamo Bay, Cuba, where 170 detainees remain. source – CBS