Rage in Poland as Obama refers to 'Polish death camps'. Obama on Tuesday labeled the Nazi facility used to process Jews for extermination as a "Polish death camp." The... 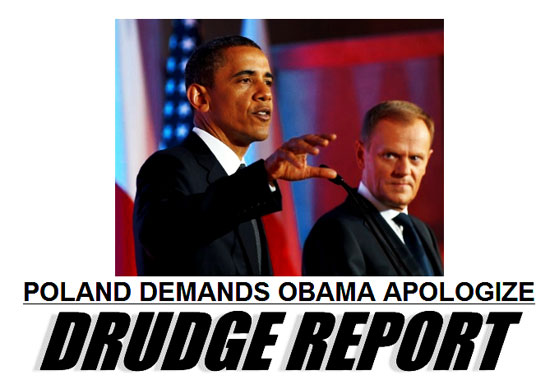 Looks like the "world's smartest president" is a little light on his world history facts.
by Geoffrey Grider May 30, 2012
NOW THE END BEGINS SHARE:

Looks like the "world's smartest president" is a little light on his world history facts.

Obama on Tuesday labeled the Nazi facility used to process Jews for extermination as a “Polish death camp.” The White House later said the president “misspoke” and expressed “regret”.

“I am convinced that our American friends can today allow themselves a stronger reaction than a simple expression of regret from the White House spokesman — a reaction more inclined to eliminate once and for all these kinds of errors,” Tusk told reporters in Warsaw.

“Today, this is a problem for the reputation of the United States,” the prime minister said.

Between 1939 and 1945, nearly six million Polish citizens perished under Nazi Germany’s brutal World War II occupation of their country. More than half of Poland’s victims were of Jewish origin and they, in turn, accounted for half of the six million European Jews who perished during the Holocaust.

Many were killed in death camps set up by Nazi Germany in occupied Poland — including the most notorious, Auschwitz-Birkenau.

Poland’s government keenly watches the global media for descriptions of former Nazi German death camps as “Polish” because it says the term — even if used simply as a geographical indicator — can give the impression that Poland bore responsibility for Nazi Germany’s World War II genocide.

Although located in Poland, Auschwitz for example was set up and run entirely by German dictator Adolf Hitler’s occupying forces from 1940 to 1945. While most of the camp’s 1.1 million victims were Jews deported from other German-occupied nations, 300,000 were Polish Jews.

Until 1942, the camp was primarily a prison and killing centre for non-Jewish Poles such as resistance members. An estimated 75,000 died there, out of around 2.6 million non-Jewish Poles who perished under Nazi occupation. Many were resistance fighters like Karski.

As a young man, Karski, who was a clandestine officer of the Polish government-in-exile in London, witnessed scenes of starvation and death after infiltrating Warsaw’s Jewish Ghetto.

Dressed as a Ukrainian guard, he also went to a Nazi transit camp near Warsaw where he saw Jews beaten and stabbed and loaded into trains treated with quicklime to be taken to the gas chambers. Karski took his eye witness testimony to wartime US president Franklin Roosevelt. He later became a professor of history at Georgetown University and died in Washington aged 86 in 2000. source – Yahoo News