In its quest to promote taxpayer-funded entitlement programs, the Obama Administration has actually rewarded one state with a $5 million bonus for its efficiency in adding food-stamp recipients to... 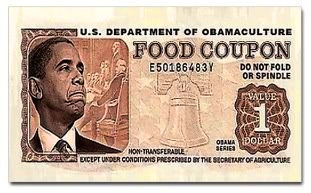 One of Obama’s heros is Saul Alinsky, Socialist writer who advocated ways to collapse an existing government that it might be rebuilt by its destroyers as a Socialist nation. In his book, “Rules For Radicals” Alinsky writes that the best way to collapse the system was by increasing the rolls of entitlement programs until bankruptcy was the inevitable outcome. This is one major reason why participation in the government food stamp program has risen 79% under Obama.

“In its quest to promote taxpayer-funded entitlement programs, the Obama Administration has actually rewarded one state with a $5 million bonus for its efficiency in adding food-stamp recipients to already bulging rolls.

It’s part of the administration’s campaign to eradicate “food insecure households” by improving access and increasing participation in the government’s Supplemental Nutrition Assistance Program (SNAP).  Incidentally, the program was recently changed to SNAP to eliminate the stigma that comes with a name like food stamps. Just a few months ago the federal agency that administers the program, the U.S. Department of Agriculture (USDA), launched a multi-million-dollar initiative to recruit more food-stamp participants even though the number of recipients has skyrocketed in the last few years.

This week Oregon officials bragged that the USDA has given the state $5 million in “performance bonuses” for ensuring that people eligible for food benefits receive them and for its “swift processing of applications.” The money comes on the heels of a separate $1.5 million award from the feds for making “accurate payments of food stamp benefits to clients.” So welfare recipients are clients? .

It marks the fifth consecutive year that Oregon has been “recognized” by the federal government for “exceptional administration” of the entitlement program, according to the announcement posted on the state’s Department of Human Services web site. The state official who runs SNAP assures that her staff will “continue working very hard to exceed expectations” so that Oregonians can “put healthy foods on their table quickly.”

As if this weren’t bad enough, the feds are also giving the state a two-year grant to test an “innovative approach” to the food-stamp “client eligibility review process.” This will make it even easier for people to get food stamps because it grants state officials a waiver that allows them to grant the benefit without interviewing the candidate. source – Judicial Watch