Obama is grooming America, like the spiritual pervert that he is, to make the shift to accepting Sharia within the United States government. ... 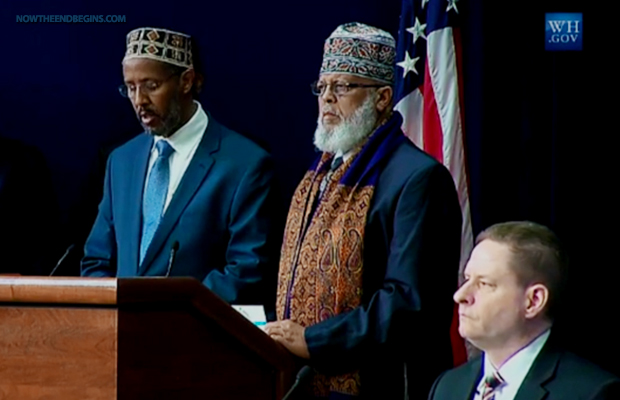 President Obama loves to mock and taunt the American people, and what happened at the start of Day #2 of his phony Summit On Violent Extremism is just the type of wicked irony he derives so much pleasure from.  A Muslim prayer was recited at the start of the second day of the White House summit on “Countering Violent Extremism,” but no other religious text was presented during the portion of the event that was open to the press.

Opening a meeting about combating violent extremism with Islamic prayer is like having morbidly obese people giving the keynote address at a health conference or having a pedophile as the principal of a child’s nursery school. Read below the inane nonsense spouted by the imam where he says that “mosques serve as a beacon of hope”! Honestly, is there anyone, anywhere that believes that?

Obama is grooming America, like the spiritual pervert that he is, to make the shift to accepting Sharia within the United States government.

“Mosques serve as a beacon of hope,” Adam said. “While imams’ provide moral compass for the Muslim community in navigating life.”

Adam said “religious leaders” want to have “dialogue” with the U.S. government about “issues of concern” and said that Muslim imams have spoken out against terrorism.

“The peace, safety and security of the United States are of fundamental importance to the Muslim American community, and we oppose any form or shape of violent extremism that threatens peaceful coexistence,” Adam said.

“We believe in the right of all people to live in peace and security,” Adam said. “Muslim imams have condemned and continue to denounce anyone who tries to use the religion of Islam to support terrorism.”

Roble spoke in English on behalf of his organization, asking people to “make peace.”

“Make peace in yourself, in your family, in your friends, in your neighbors, in your state, in your country and of the war because you are brothers and sisters,” Roble said. “And God bless you.” source