Energy Secretary Ernest Moniz on Monday acknowledged that the US has known for years that Iran is just two to three months form having enough fissile material for a... 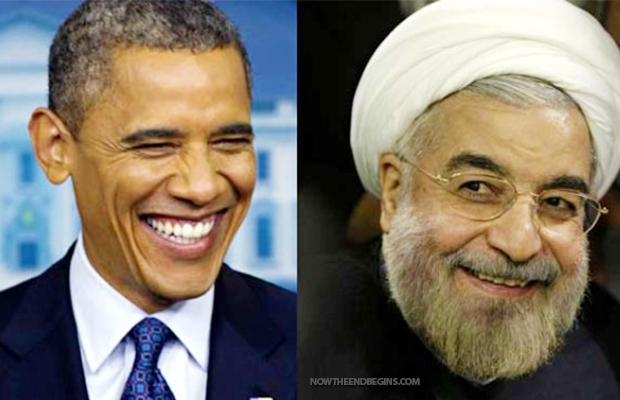 President Obama stressed to the world that Iran’s breakout time to have enough fuel to make a bomb was a year, and now it is being reported that he has known for a long time that Iran only needed 2-3 months to obtain enough fuel for a bomb.

EDITOR’S NOTE: As you read this story where the Obama White House now fully and freely admits that Iran is only 2-3 months away from achieving a nuclear weapon, compare that with the video below where he promised 28 times that he would never allow this to ever happen. Under any circumstances. Well, guess what? It is happening right now, and he is doing nothing to stop it.

Writing in Bloomberg View on Monday, journalist Eli Lake says US President Barack Obama has known for years that Iran needed only 2-3 months to produce enough fuel for a nuclear bomb, but purposely avoided saying so publicly, stressing instead that a full year was needed for Iran to build a nuclear bomb.

Energy Secretary Ernest Moniz on Monday acknowledged that the US has known for years that Iran is just two to three months form having enough fissile material for a nuclear bomb.

Since the information was declassified this month, Obama has been pressing the fact that Iran is only two to three months away from enough materials for a nuclear bomb, as part of its efforts to push a deal through.

When asked how long the Obama administration has known this, he responded, “Oh, quite some time. They are now, they are right now spinning, I mean enriching with 9,400 centrifuges out of their roughly 19,000. Plus all the…R&D work. If you put that together it’s very, very little time to go forward. That’s the 2-3 months.”

Lake spoke with Brian Hale, a spokesperson of the Office of the Director of National Intelligence, who confirmed that the two to three month estimate on fissile material was only declassified on April 1.

Interestingly, the April 1 juncture in time almost exactly dovetails with the date at which the US reached a framework agreement with Iran on its nuclear program. According to the paper, Obama declassified the information so as to urge Congress and the public to accept the deal, claiming it would “extend” Iran’s breakout time.

That claim notwithstanding, Iran will be left with all of its nuclear facilities under the deal, and be allowed to continue enriching. Iran has also made clear that in contrast with the US version of the agreement, it intends to keep all its enriched uranium stockpiles, not let “foreigners” inspect its nuclear facilities, and start using advanced IR-8 centrifuges that are 20-times as effective as standard ones as soon as a deal is reached.

Since the information was declassified this month, Obama has been pressing the fact that Iran is only two to three months away from enough materials for a nuclear bomb, as part of its efforts to push a deal through.

However, when he began his second term in 2013, he stressed that Iran was over a year from producing a nuclear bomb.

That position was apparently a deft act of disinformation, as according to the US intelligence community, both assessments may have been true: Iran may indeed have been a year from having an operational nuclear weapon, but it was only two or three months from having enough fuel to make one, a process that is much easier to detect and respond to.

Watch Obama lie through his teeth 28 times in saying he would never allow Iran to have a nuclear weapon:

Obama appears to have been making use of the fact that the term “breakout time” is alternatively used for describing how long it would take to obtain enough fissile material, and how long it would take to complete a bomb. Obama repeatedly disagreed directly with Israel over assessments on Iran’s breakout time by emphasizing it was over a year away even as Israel insisted the time was actually a mere matter of months.

It is estimated that the 2013 emphasis on the one year breakout time frame was meant to buy time for nuclear negotiations with Iran, both before and after a November 2013 interim agreement was reached.

If he had admitted that Iran was as little as two months from having the means to create a nuclear weapon, Obama likely anticipated he would not have as much freedom to negotiate or as much footing to oppose proposals of a strike to take out Iran’s nuclear facilities before it was too late.

“A year ago,” writes Lake, “after the nuclear talks started, Secretary of State John Kerry dropped the first hint about the still-classified Iran breakout estimate. He told a Senate panel, ‘I think it is fair to say, I think it is public knowledge today, that we are operating with a time period for a so-called breakout of about two months.'”

As far as creating a full nuclear weapon, it has been noted that Iran’s intercontinental ballistic missile (ICBM) and warhead programs, both needed in producing a functional nuclear bomb, are not included in the scope of the nuclear deal.”

Once again, the American people and the world have been lied to by this diabolical tyrant. Why is he still in office? What is going to happen to us now? Will we be placed in camps? Is the upcoming “Jade Helm 15” military exercise actually a sinister plot to begin Martial Law in America?

I believe we have come to a place of no return in America. We are under the righteous judgment from our Holy God. May He send His Son very soon to take us away from this earth.