Secretary of State John Kerry warned of serious repercussions for Russia on Monday if last-ditch talks over the weekend to resolve the crisis in Ukraine failed to persuade Moscow... 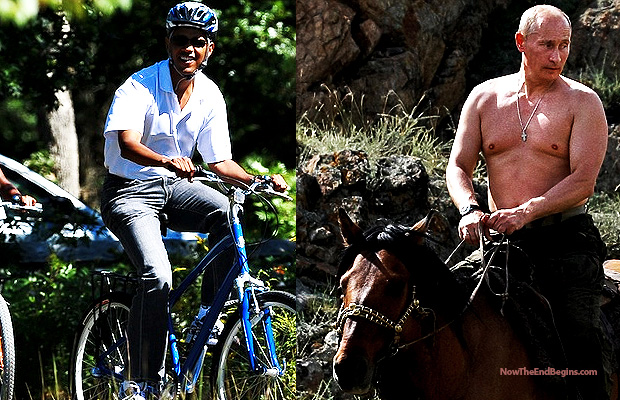 Washington, DC – Secretary of State John Kerry warned of serious repercussions for Russia on Monday if last-ditch talks over the weekend to resolve the crisis in Ukraine failed to persuade Moscow to soften its stance.

You will note that the main bar on Obama’s bicycle sharply curves down. This is because it’s a GIRL’S bike.

Kerry will travel to London for a Friday meeting with Russian Foreign Minister Sergey Lavrov ahead of a Sunday referendum vote in the Crimea region to secede from Ukraine and join the Russian Federation.

U.S. and European officials argue that Moscow is orchestrating the referendum and waging an intimidation campaign with thousands of Russian troops controlling the region. If Russian-backed lawmakers in Crimea go through with the Sunday referendum, Kerry said the U.S. and its European allies will not recognize it as legitimate under international law.

The U.S. and Europe on Monday would then unite to impose sanctions on Russia, Kerry told a Senate Appropriations subcommittee Thursday during a hearing on the State Department’s budget.

“There will be a response of some kind to the referendum itself,” Kerry said. “If there is no sign [from Russia] of any capacity to respond to this issue … there will be a very serious series of steps on Monday.”

“Our hope is to have Russia join in respecting international law. … There is no justification, no legality to this referendum that is taking place,” he said. “The hope is that reason will prevail but there is no guarantee of that.”

Sen. Lindsey Graham, a South Carolina Republican and a top critic of President Obama’s foreign policy, asked what the administration would do if Russian forces advance farther into the eastern area of Ukraine, and the new government in Kiev asks the U.S. for weapons to fight the Russians.

Kerry responded carefully, saying “we have contingencies – we are talking through various options that may or may not be available.” “Our hope is not to create hysteria or excessive concern about that at this point in time,” he said. “Our hope is to avoid that, but there’s no telling that we can.” source – Washington Examiner