Did Obama Just Declare Himself King Over America on Twitter?

The Obama White House sent out a very disturbing photo over Twitter tonight of Obama seated on the Iron Throne from the hit HBO series "Game of Thrones", a... 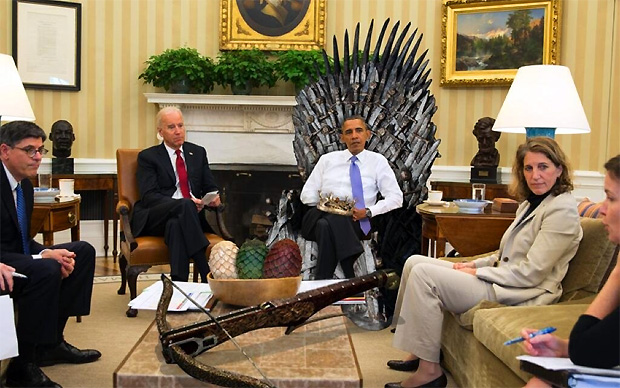 Does Obama fancy himself to be a King now?
by Geoffrey Grider May 11, 2014
NOW THE END BEGINS SHARE:

Washington, DC – The Obama White House sent out a very disturbing photo over Twitter tonight of Obama seated on the Iron Throne from the hit HBO series “Game of Thrones”, a fantasy book series where characters vie for power over the Iron Throne.

As unsettling as it is seeing Obama sitting on any throne, whats more unsettling is the fact that he views his time in office as an imperial presidency. He rules through Executive Order, and more often than not, contrary to the will of the America people.

Photoshopped or not, this is indeed how Obama views himself. Perhaps he will declare his kingship at the start of his third term.