Neither President Obama nor Vice President Biden showed up — and in fact, America’s only representative was its relatively unknown and low-profile ambassador to France. ... 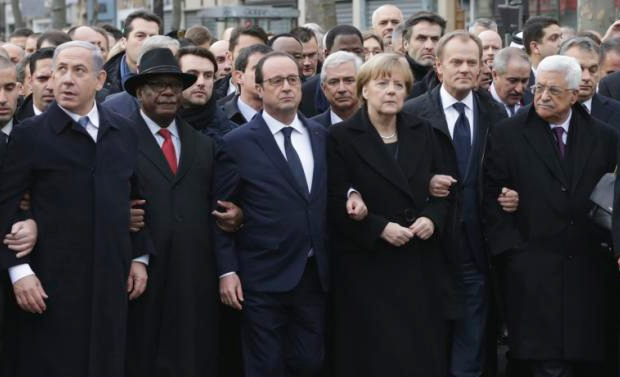 As the leaders of the free world assembled over the weekend in France to show a combined, united front against Muslim terror, guess who didn’t attend? (Oh come on, guess!) And why didn’t he or his buddies attend? It’s because of a promise he made back in 2008, remember this one?:

“I will stand with the Muslims should the political winds shift in an ugly direction.” Barack Hussein Obama

This weekend in Paris, as even Netanyahu and Abbas put aside their differences to attend, Obama kept that promise to always stand on the side of the Muslims. What was Obama doing the night of the rally? Nothing scheduled. Where was Holder? He was in France attending some other meeting. The message that Obama sent by not attending or sending any meaningful representative of the United States should make it crystal clear whose side he is on in the ” war on terror”.

More than 40 heads of state came together in Paris to denounce a wave of terrorism that defiled the City of Light last week — yet there was one glaring exception: The U.S. sent only a low-level official.

Even Israeli Prime Minister Benjamin Netanyahu and Palestinian Authority President Mahmoud Abbas set aside their differences to march together on Boulevard Voltaire.

But the nation that stands as the symbolic face of the war on terror was nowhere in sight.

Neither President Obama nor Vice President Biden showed up — and in fact, America’s only representative was its relatively unknown and low-profile ambassador to France. source