Why Did Obama Give The Order For 14 Million Doses of Potassium Iodide?

The Department of Health and Human Services has ordered 14 million doses of potassium iodide, the compound that protects the body from radioactive poisoning in the aftermath of severe... 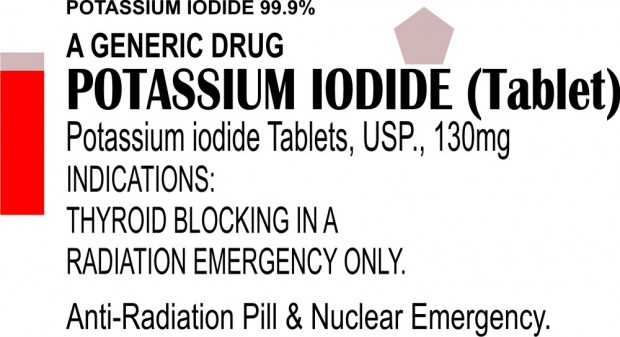 The Department of Health and Human Services has ordered 14 million doses of potassium iodide, the compound that protects the body from radioactive poisoning in the aftermath of severe nuclear accidents, to be delivered before the beginning of February.

According to a solicitation posted on the Federal Business Opportunities website, the DHHS asks contractors to supply, “potassium iodide tablet, 65mg, unit dose package of 20s; 700,000 packages (of 20s),” a total of 14 million tablets. The packages must be delivered on or before February 1, 2014.

Why are they ordering so many doses, and why now? Obviously they are planning for something quite specific, and not just planning in general.

Potassium iodide helps block radioactive iodine from being absorbed by the thyroid gland and is used by victims of severe nuclear accidents or emergencies. Under current regulations, states with populations living within 10 miles of a nuclear plant are encouraged, but not required, to maintain a supply of potassium iodide.

A search of the FedBizOpps website returns no other results regarding the purchase of potassium iodide from any government agency, suggesting that the DHHS bulk buy of the tablets is unprecedented in recent times.

The ongoing crisis at the Fukushima nuclear power plant has prompted concerns that the purchase is connected to the threat posed by radioactive debris washing up on the shores of the west coast or the potential for another natural disaster occurring in Japan which could impact the U.S.

“Governments usually respond to disasters very similarly; first move is to avoid panic,” writes The West Wire. “The Japanese didn’t want to panic the world, or tarnish their honor and now, as a consequence of their reluctance, Japanese citizens and international aid personal find themselves in a horrible state of being.”

“Panic is usually avoided by keeping their citizens as blind to the truth as possible, until confrontation with the truth becomes inevitable. The crucial question at this juncture; “would our government be reluctant about warning us of potential disaster, in an attempt to avoid panic?” 14 million doses of Potassium Iodide say that might just be the case.”

Last month it was revealed that 71 U.S. sailors who helped during the initial Fukushima relief efforts are suing the Tokyo Electric Power Co. (TEPCO) after they returned with thyroid cancer, Leukemia, and brain tumors as a result of being exposed to radiation at 300 times the safe level.

TEPCO has repeatedly been caught lying in their efforts to downplay the scale of the disaster. In September it was confirmed that radiation readings around the power plant were 18 times higher than previously reported by TEPCO. After a tank leaked 300 tonnes of toxic water in August, groundwater radiation readings at the plant soared to 400,000 becquerels per litre, the highest reading since the nuclear accident occurred in March 2011.

Top scientists have warned that if another major earthquake hits Fukushima, which is almost inevitable, it would mean “bye bye Japan” and the complete evacuation of the west coast of North America.

Now that radioactive debris is hitting the West Coast of North America, numerous different animals and sea life are suffering from mysterious diseases, including 20 bald eagles that have died in Utah over the last few weeks alone. source – InfoWars