The US State Department signaled that it would not insist that Syrian President Bashar Assad produce the list Saturday, the end of a seven-day period spelled out in the... 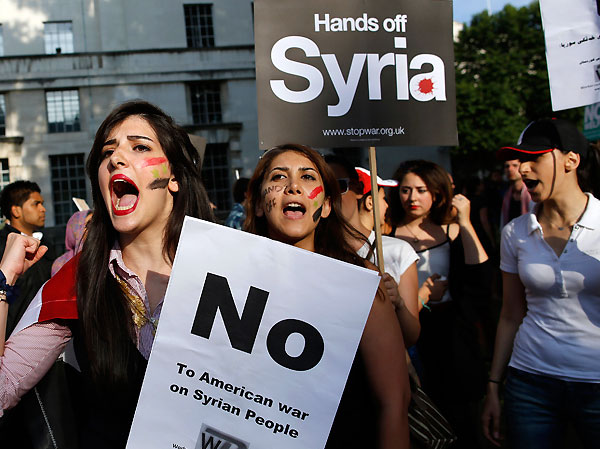 Somewhere in the Middle East, right now, Putin and Assad are sharing cigars and cognac around a roaring fire, with the melodious sound of laughter rising into the night sky as they high-five each other over an 8×10 glossy of Obama. ‘Red line’ indeed.

WASHINGTON — The ambitious U.S.-Russian deal to eliminate Syria’s chemical weapons, hailed as a diplomatic breakthrough just days ago, hit its first delay Wednesday with indications that the Syrian government will not submit an inventory of its toxic stockpiles and facilities to international inspectors by this weekend’s deadline.

The State Department signaled that it would not insist that Syrian President Bashar Assad produce the list Saturday, the end of a seven-day period spelled out in the framework deal that Washington and Moscow announced last weekend in Geneva.

Marie Harf, a State Department spokeswoman, said Wednesday that “our goal is to see forward momentum” by Saturday, not the full list. “We’ve never said it was a hard and fast deadline.”

It wasn’t clear whether Syrian officials needed more time to complete a formal declaration of their chemical arms, or whether the disarmament deal itself was in trouble.

Secretary of State John F. Kerry had described the date as the first of several “specific timelines” that would indicate whether Syria is committed to the deal that he and Russian Foreign Minister Sergei Lavrov had worked out.

“We agreed that Syria must submit within a week — not in 30 days, but in one week — a comprehensive listing,” Kerry said Saturday. He said the U.S. would allow “no games, no room for avoidance, or anything less than full compliance.”

Senior Obama administration officials had praised Russia for persuading Assad’s government to relinquish its lethal chemical arsenal, one of the world’s largest, by mid-2014 in a deal to avoid U.S. missile strikes in retaliation for the Aug. 21 poison gas attack that the U.S. says killed more than 1,000 people.

But Moscow’s ability or willingness to push its ally in Damascus to meet the first deadline in the deal now is being questioned.

Kerry and Lavrov sought last weekend to portray the two powers as united. The gap between them, however, has become more apparent and is threatening to snarl efforts to craft a United Nations Security Council resolution that lays out how Syria is to meet its obligations.

The resolution needs to be complete before the first steps can be taken to impound and either remove or destroy Syria’s arsenal. Diplomats said Western countries split with Russia in a meeting Tuesday over Western demands for tough enforcement of the agreement.

Diplomats hope to complete the resolution by Friday, but if they fall short the work may be delayed further next week because of the meeting of the U.N. General Assembly.

The Organization for the Prohibition of Chemical Weapons, an international body based in The Hague, is expected to take several days to complete its analysis of the Syrian “initial declaration,” and then will submit its report to the United Nations. source – LA Times