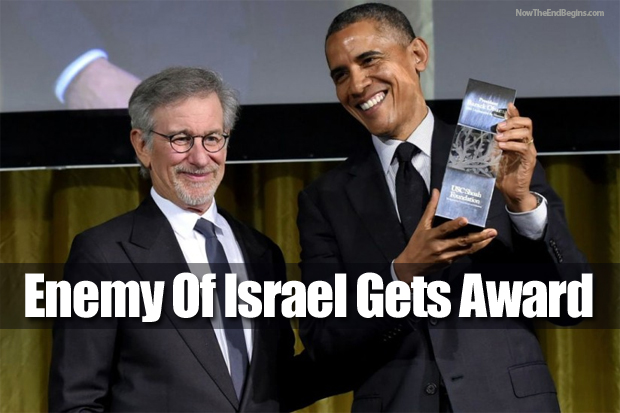 Obama pressures Israel into releasing the murderer of a Holocaust survivor and then shows up to get an award and deliver a speech about the importance of respecting Holocaust survivors… after a few gags.
by Geoffrey Grider May 9, 2014
NOW THE END BEGINS SHARE:

The Shoah Foundation fundraiser kicked off with the timeless comedy of Conan O’Brien.

O’Brien got one of USC Shoah Foundation’s 20th Anniversary Gala Show night’s biggest laughs when he mentioned Spielberg’s efforts to record Holocaust survivors and other victims of genocide. O’Brien said the filmmaker “was recording evidence of intolerance long before Donald Sterling’s girlfriend.”

Obama was seen laughing at the remark.

Of course he was. Because any Obama occasion is filled with the same petty and nasty politics. But the irony is that at another time Sterling would have been sitting in the audience and laughing.

Isaac Rotenburg was born in 1927 in Boolodva, Poland. He was one of seven children, born to Nathan, a tailor. The family was sent to the Sobibor death camp during the Holocaust.

He and his brother were selected to work in the camp. He had to tie together bundles of victims’ clothes. The rest of the family perished. With the outbreak of the revolt at Sobibor, Isaac and his brother managed to escape from the camp, but they lost each other mayhem that broke out in the revolt.

Isaac reached the shores of Israel in April 1947. A year later he joined the army and fought in the War of Independence in the north, near Kibbutz Manara. He worked as a plasterer and when he reached the age of retirement,  decided to continue working several hours a day to keep himself busy.

In 1994, on a Tuesday, Isaac was at work repairing the floor, his knees bent, when two Arab Muslims came in and struck his head with an axe.

Among those slated to be released is Abu-Musa Salam Ali Atia, a Gaza Strip resident and member of the Fatah party who was convicted of murdering Holocaust survivor Isaac Rotenburg as part of an initiation into a Palestinian terror group.

Just in case you thought this was about the Holocaust. It’s not. It’s about using the lessons of the Holocaust to protect Muslims… especially those who like to carry out a second Holocaust. Because this is what liberalism is.

Spielberg then took the podium. “Everywhere from Syria to southern Sudan, the world has yet to learn the lessons,” he said of genocide and war during his introduction of Obama.”This program exists because we know the future can be re-written.”

Spielberg attacked Israel for defending itself. He’s throwing a party for a politician who is helping Iran go nuclear. The future looks suspiciously like the past. And Steven Spielberg is helping it stay that way.

People who act surprised that Spielberg would use the Shoah Foundation to promote Obama, while Obama promotes Iran’s nuclear program, have forgotten Spielberg’s history.

This latest stunt is mild compared to Spielberg’s decision to take the story of the murdered Israeli Olympic athletes and turn it over to radical leftist Tony Kushner, who had said that he wishes Israel had never existed, who turned it into an Anti-Israel flick.

Bizarrely enough, Obama’s speechwriter shoved this line into his teleprompter. “It’s up to us to speak out against rhetoric that threatens the existence of a Jewish homeland.” Obama has not only not spoken out against the PLO, but has forced Israel to release the murderers of Jews, including the murderer of a Holocaust survivor.

He says “We can teach our children the hazards of tribalism” apparently unaware that Jewish survival depends on tribalism and that his own reign has been partisan and tribal.

I have this remarkable title right now — President of the United States — and yet every day when I wake up, and I think about young girls in Nigeria or children caught up in the conflict in Syria — when there are times in which I want to reach out and save those kids —

…or to the murder of Isaac Rotenburg.

The Shoah Foundation party doesn’t embody a movement to prevent the Holocaust from happening again. It embodies the very same self-absorption and liberal pieties that caused American Jews to let it happen in the first place. source – Front Page