Obama Flooding US With Unscreened Muslim Immigrants In Record Numbers 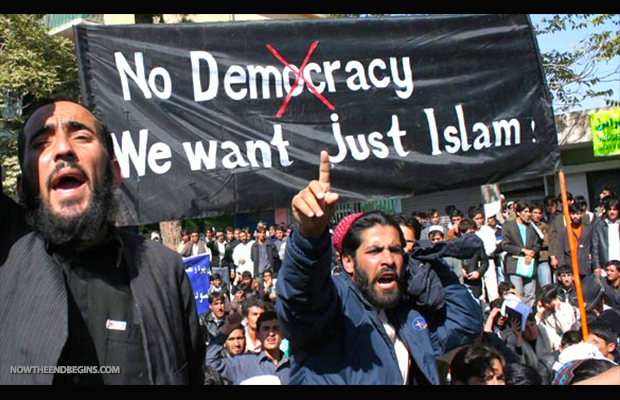 This picture was not taken in Iraq or Syria, it was taken in Dearborn, Michigan.
by Geoffrey Grider April 3, 2015
NOW THE END BEGINS SHARE:

Muslim immigration from dangerous nations is dramatically higher in recent years, and government assurances that immigrants are being properly screened is “a farce,” according to accomplished author and columnist Paul Sperry.

“I don’t think you can overstate the importance that the rise of Islamic fundamentalism will have to the rest of the world in the century ahead-especially if, as seems possible, its most fanatical elements get their hands on nuclear and chemical weapons and the means to deliver them against their enemies.” —Ronald Reagan

“It’s a huge surge under Obama. In the last three years, he’s averaged 100,000 new immigrants from Muslim nations a year. That is very alarming. It’s more than we’re importing both from Central America and Mexico combined. This is a big shift in immigration flows,” said Sperry, who is the author of “Infiltration: How Muslim Spies and Subversives Have Penetrated Washington” and co-author of “Muslim Mafia: Inside the Secret Underworld That’s Conspiring to Islamize America.”

This picture was not taken in Iraq or Syria, it was taken in Dearborn, Michigan.

The stated reason for the influx in recent years is the rise in refugees from war-torn nations like Syria and Iraq. The number of people accepted from Syria in particular baffles Sperry, who said there is a long standing policy of keeping Syrians at bay.

“Syria has always been on our terrorist list,” he said. “We have had very strict restrictions on Syrian immigration. Since Syria’s become a failed state, Obama’s increased the number of refugees. By the time he leaves office, we will be importing over 10,000 Syrians into this country. This is a concern because Iraq and Syria are now controlled by the Islamic State.” source