Obama Has More Fake Twitter Followers Than Anyone On The Planet

Barack Obama has a "fake" problem that has dogged him for the past four and a half years. His birth certificate is of questionable origin, he lied about his... 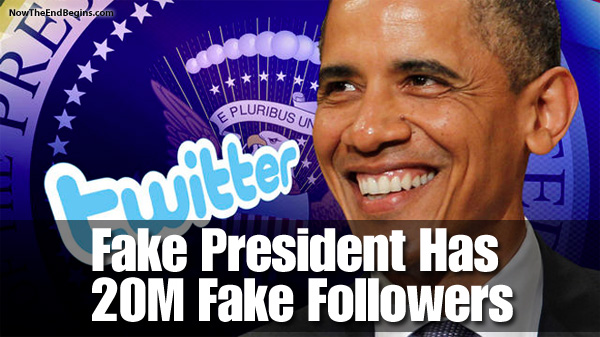 The man who wasn’t there

Barack Obama has a “fake” problem that has dogged him for the past four and a half years. His birth certificate is of questionable origin, he lied about his family history, he has a fake Social Security number, none of his classmates at Columbia can seem to remember ever attending classes with him, and he has a well-documented history of making either completely false statements and murky half-truths.

So perhaps it is only fitting that this man, whose entire life history appears to be fabricated from whole cloth, has the most number of fake Twitter followers on the face of the earth. And oh, almost forgot to mention all the people who voted for him who are fake Americans.

From Daily Mail UK: Among influential U.S. political tweeters, President Barack Obama is the undisputed king of the fake followers. A Mail Online analysis ranks his sizable Twitter following as the most deceptive total among the 21 most influential accounts run by American politicians: More than 19.5 million of his 36.9 million Twitter followers are accounts that don’t correspond to real people.

Obama’s best-selling book “Dreams From My Father” contains “38 instances” in which the available evidence contradicts “significant elements of Obama’s own story of his life and his family history.”

Of the president’s 36.9 million Twitter followers, an astonishing 53 per cent – or 19.5 million – are fake accounts, according to a search engine at the Internet research vendor StatusPeople.com. Just 20 per cent of Obama’s Twitter buddies are real people who are active users.

Overall, the five most influential accounts linked to the Obama administration – the first lady has two – account for 23.4 million fake followers.