Obama Blames Mexico Gun Violence On US, Forgets To Mention ‘Fast and Furious’

President Obama said "Most of the guns used to commit violence here in Mexico come from the United States..." ... 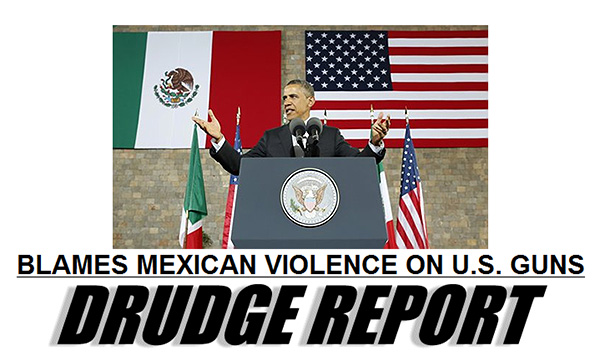 Fast and Furious all but forgotten?

Many of weapons involved in violent gang-related shootings in Mexico arrived in Mexico from a secret gunrunning operation scheme hatched by Obama called ‘Fast and Furious’. From October 2nd, 2012: ”

Citing a Mexican Army document it obtained and published, Univision reported that “three of the high caliber weapons fired that night in Villas de Salvarcar were linked to a gun tracing operation run by the Bureau of Alcohol, Tobacco, Firearms and Explosives (ATF).”

Univision held nothing back in its broadcast, airing images and video of bloodied, dead bodies. The network showed the faces of the dead and walked viewers through how cartel operatives hunted their victims down with the weapons President Barack Obama’s administration allowed straw buyers to traffick to them.

One photo, for instance, showed pools of blood in the streets of a Mexican town after a “massacre” committed by murderers armed with Fast and Furious weapons. Video footage showed where some of the victims were killed and how the cartels chased their helpless victims to their deaths. 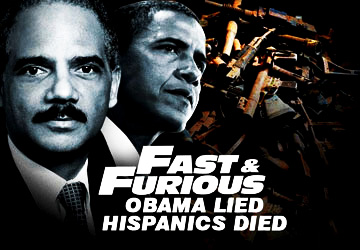 The Univision broadcast implicitly suggested that Americans have no regard for the victims of violence American policy helps fuel — that is, until one of those victims ends up being an American.

It wasn’t until U.S. Border Patrol agent Brian Terry’s murder prompted whistle-blowers to come forward to Congress to publicly voice concerns about the program that the Obama admin stopped allowing firearms to flow into Mexico.

From Real Clear Politics: “Most of the guns used to commit violence here in Mexico come from the United States,” President Obama said during a speech at Mexico’s Anthropology Museum. “I think many of you know that in America, our Constitution guarantees our individual right to bear arms. And as president, I swore an oath to uphold that right, and I always will.”

“But at the same time, as I’ve said in the United States, I will continue to do everything in my power to pass common-sense reforms that keep guns out of the hands of criminals and dangerous people. That can save lives here in Mexico and back home in the United States. It’s the right thing to do,” Obama added. source – Real Clear Politics