There are currently five separate committee investigations into the attack on a U.S. diplomatic outpost in Benghazi... 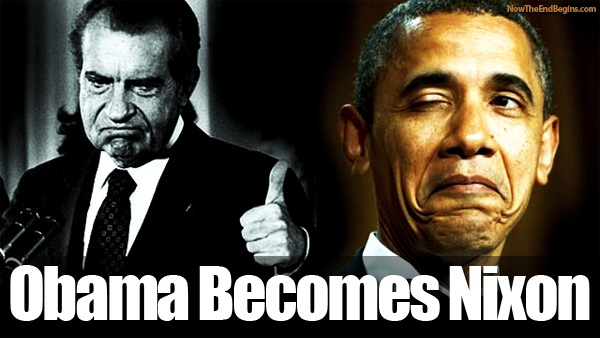 Like Richard Nixon before him, Barack Hussein Obama's arrogance led him to believe he could just speak and make the scandal go away.
by Geoffrey Grider May 14, 2013
NOW THE END BEGINS SHARE:

Just days after news broke that the IRS targeted conservative nonprofits, Speaker John Boehner’s House committees will morph into mock courtrooms where the White House will be the defendant in what amounts to a number of high-stakes political trials.

Like Richard Nixon before him, Barack Hussein Obama’s arrogance led him to believe he could just speak and make the scandal go away.

The most recent scandal to grip the Obama administration came Monday evening, when The Associated Press disclosed that the Justice Department sought its reporters’ phone records — including those of correspondents who sit in the Capitol. Within hours, House Republicans vowed to investigate. To make things worse for President Barack Obama, Attorney General Eric Holder is scheduled to be on Capitol Hill Wednesday for a House Judiciary Committee hearing.

That’s hardly the president’s only problem

Two separate committees — Oversight and Government Reform, and Ways and Means — will probe whether the IRS was treating right-leaning groups unfairly. Republicans moved swiftly to secure the IRS acting director for a Friday hearing, just a week after the news broke. GOP aides hinted Monday afternoon that widespread calls for the director’s resignation could come shortly.

The panels will probe whether the targeting of right-leaning groups is systematic, or isolated. Ways and Means Republicans say they are interested in when top IRS officials, specifically former Commissioner Douglas Shulman was told about search terms used to single out conservative groups. Shulman told Ways and Means members in March 2012 that the IRS was not engaged in any manner of political targeting.

Top GOP sources acknowledge that it’s highly unlikely the White House was directly involved in the IRS mess, but the probe is sure to add to the Republican-spun narrative of Democratic, Big Government overreach.

The IRS probes might be new to the public, but they’re not to House Republicans, who have long worried about politicization at the agency. The hot-button topic has come up in several committee hearings since the GOP took the majority.

The inquest into the IRS is just the latest in a string of GOP-led investigations suddenly gaining steam on Capitol Hill. Instead of negotiating with the White House, GOP lawmakers are now investigating it.

There are currently five separate committee investigations into the attack on a U.S. diplomatic outpost in Benghazi, and a probe into Health and Human Services Secretary Kathleen Sebelius raising millions of dollars to promote Obamacare. Ways and Means is demanding answers to seven questions on this matter, as well.

All together, roughly one-third of House committees are engaged in investigating some aspect of the Obama administration.

“The speaker and other House leaders have been clear: Effective, responsible oversight is a key constitutional responsibility of Congress,” said Michael Steel, Boehner’s spokesman. “Whether the topic is the truth about Benghazi, thuggish political attacks from the IRS or the ‘train wreck’ of the president’s health care law, we will keeping fighting to make sure the American people know the truth.” source – Politico