Al-Qaeda in Iraq has acknowledged for the first time on Tuesday that al-Nusra Front, the rebel faction fighting President Bashar al-Assad’s regime in Syria, is indeed part of... 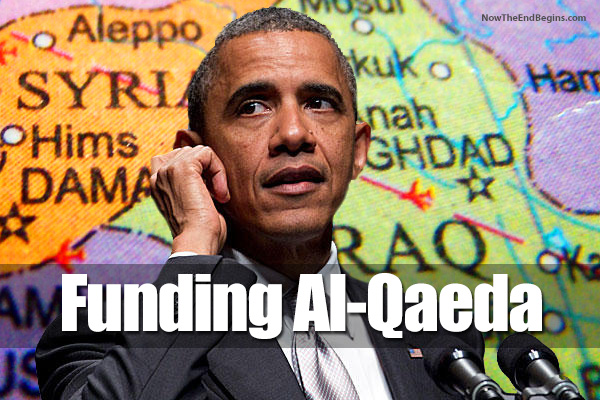 Despite Obama specifically citing the suffering of Syria's Muslim civilians, no mention of the Christians who constitute 10 percent of Syria's population.
by Geoffrey Grider April 11, 2013
NOW THE END BEGINS SHARE:

After the carnage unfolded at the U.S. diplomatic outpost in Benghazi, a potential gun running scheme to arm Libyan and perhaps even Syrian rebels was uncovered. The troubling aspect of arming said rebels is the fact that, according to some intelligence experts, those rebels are actually al-Qaeda.

Now, al-Qaeda in Iraq has acknowledged for the first time on Tuesday that al-Nusra Front, the rebel faction fighting President Bashar al-Assad’s regime in Syria, is indeed part of its network.

What’s more, the militant jihadist group said it is fighting to establish an Islamic state in the country.

The remarks, made by Iraqi al-Qaeda leader Abu Bakr al-Baghdadi and published in Al Aribya have finally confirmed longheld suspicions that the two groups are one in the same.

“It’s now time to declare in front of the people of the Levant and [the] world that the al-Nusra Front is but an extension of the Islamic State in Iraq and part of it,” the SITE Monitoring Service quoted Baghdadi as saying in a speech released on jihadist forums Monday.

The two groups will now reportedly merge and be called the “Islamic State in Iraq” and the “Levant.”

The Syrian rebels aren’t the only ones who could receive support from al Qaeda. Baghdadi said that al Qaeda would furnish support to other jihadists “on the condition that the country and its citizens be governed according to the rules dictated by Allah.”

Al-Nusra Front was labeled a “terrorist” group by Washington back in December over its suspected affiliation to al-Qaeda in Iraq. Back then, U.S. State Department dubbed al-Nursa as simply a “new alias” for al-Qaeda in Iraq, saying it was “an attempt by AQI to hijack the struggles of the Syrian people for its own malign purposes.”

Al Aribya also notes that jihadist forums online reveal that hundreds of radicals have traversed from Iraq into Syria to lead the charge against Assad’s regime. source – The Blaze