America, Obama is a traitor, but it is you who voted for him that have committed the truly treasonous act.... 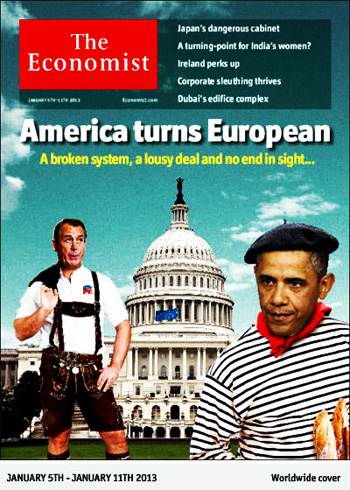 Bringing In The One World Government

In case you’ve been sleeping for the past four years, please note the following: the America you grew up with is officially and formally gone. It has been replaced with Obama’s Socialist vision, the “radical transformation” he promised when you people elected him. American prosperity, capitalism, the chance to achieve your dreams, it’s all gone.

America, Obama is a traitor, but it is you who voted for him that have committed the truly treasonous act.

From France 24: France’s Esther Duflo, a world renowned economist, has been nominated by US President Barack Obama to join a government body dedicated to advising the administration on global development policy.

As Obama embraces the Socialist model that he loves so much, Europe mocks us for our stupidity.

Called the Global Development Council, the group was founded by Obama in 2010 to help shape US development efforts abroad.

While Duflo’s nomination will likely be viewed with a sense of pride in France, it comes as Obama’s leadership continues to be dogged by unflattering comparisons in the media to European-style socialism.

Just Friday, the cover of financial news magazine The Economist depicted Obama wearing a beret, red neckerchief and a striped mariner shirt, under a headline that read “America turns European”. The article criticised the country’s recent fiscal-cliff deal as “lousy”, saying its mismanagement bore striking similarities to the “mess in the euro zone”.

Duflo, who was raised in a “left-leaning Protestant” family, said she became aware of economic divides and social injustice at a very early age.

“I was always conscientious of the gap between my existence and that of the world’s poor,” she told weekly French magazine l’Express in a January, 2011 article. “As a child, I was extremely troubled by the complete randomness of chance that I was born in Paris to an intellectual, middle class family, when I could have just as easily been born in Chad. It’s a question of luck. It inspired in me a sense of responsibility.”

While Duflo may feel that her privilege in life is the result of chance, President Obama’s intention to appoint her to his Global Development Council is not. Ever since completing her undergraduate studies at Paris’s prestigious Ecole Normale Supérieure in 1994, Duflo has led a distinguished career, collecting numerous academic honours and awards along the way.

One of the world’s 100 most influential people

It is by no means an exaggeration to call the now 40 year-old Duflo one of the world’s star economists. French daily Le Monde once awarded her its “Best French Young Economist Prize”, and in 2009, she was granted a MacArthur Fellowship (which has also been dubbed ‘the genius grant’). Duflo’s work also earned her the John Bates Clark medal in 2010, which is considered second only to the Nobel.

The following year, Time magazine named Duflo one of 100 most influential people in the world. The magazine applauded her for relentlessly “questioning conventional wisdom”.

“She has broken out of the ivory tower to do something economists rarely do: gather real data to see what really works in alleviating poverty,” Time wrote.

A closer look at poverty

Duflo’s research has largely focused on microeconomic issues in developing countries and looks at areas such as education, access to finance as well as health and policy evaluation. As co-founder and director of MIT’s Abdul Latif Jameel Poverty Action Lab, Duflo has singled herself out by championing the idea that it is impossible to successfully tackle the issue of poverty without a thorough understanding of the population at hand. In other words, the devil is in the detail.

While Duflo’s work has already helped contribute to changing the way governments and organisations deal with global poverty, her potential new role as a member of the Global Development Council will allow her to have a direct impact on how the US handles such issues. source – France 24