An urgent request from the Libya CIA annex for military back-up during the attack on the U.S. Consulate and subsequent attack several hours later was denied by U.S. officials.... 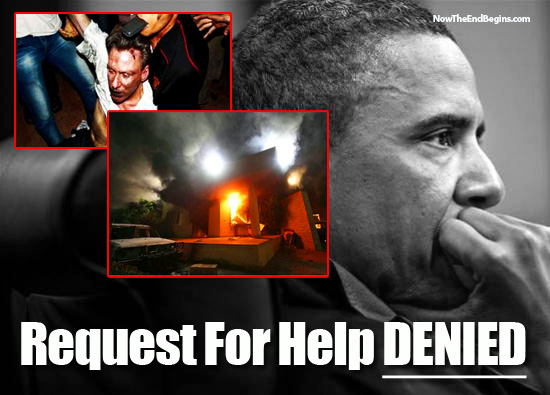 At that point, they called again for military support and help because they were taking fire at the CIA safe house, or annex. The request was denied.
by Geoffrey Grider October 26, 2012
NOW THE END BEGINS SHARE:

The cowardly Obama administration left them to die

“And he wrote in the letter, saying, Set ye Uriah in the forefront of the hottest battle, and retire ye from him, that he may be smitten, and die.” 2 Samuel 11:15

Fox News has learned from sources who were on the ground in Benghazi that an urgent request from the CIA annex for military back-up during the attack on the U.S. Consulate and subsequent attack several hours later was denied by U.S. officials — who also told the CIA operators twice to “stand down” rather than help the ambassador’s team when shots were heard at approximately 9:40 p.m. in Benghazi on Sept. 11.

Former Navy SEAL Tyrone Woods was part of a small team who was at the CIA annex about a mile from the U.S. Consulate where Ambassador Chris Stevens and his team came under attack. When he and others heard the shots fired, they informed their higher-ups at the annex to tell them what they were hearing and requested permission to go to the consulate and help out. They were told to “stand down,” according to sources familiar with the exchange. Soon after, they were again told to “stand down.”

Woods and at least two others ignored those orders and made their way to the Consulate which at that point was on fire. Shots were exchanged. The quick reaction force from the CIA annex evacuated those who remained at the Consulate and Sean Smith, who had been killed in the initial attack. They could not find the ambassador and returned to the CIA annex at about midnight.

At that point, they called again for military support and help because they were taking fire at the CIA safe house, or annex. The request was denied. There were no communications problems at the annex, according those present at the compound. The team was in constant radio contact with their headquarters. In fact, at least one member of the team was on the roof of the annex manning a heavy machine gun when mortars were fired at the CIA compound. The security officer had a laser on the target that was firing and repeatedly requested back-up support from a Specter gunship, which is commonly used by U.S. Special Operations forces to provide support to Special Operations teams on the ground involved in intense firefights. The fighting at the CIA annex went on for more than four hours — enough time for any planes based in Sigonella Air base, just 480 miles away, to arrive. Fox News has also learned that two separate Tier One Special operations forces were told to wait, among them Delta Force operators. 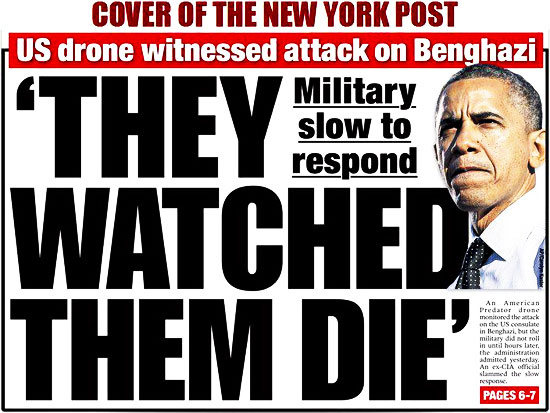 They watched the entire event unfold in real-time via drone camera, and they just watched…and did nothing.

A Special Operations team, or CIF which stands for Commanders in Extremis Force, operating in Central Europe had been moved to Sigonella, Italy, but they too were told to stand down. A second force that specializes in counterterrorism rescues was on hand at Sigonella, according to senior military and intelligence sources. According to those sources, they could have flown to Benghazi in less than two hours. They were the same distance to Benghazi as those that were sent from Tripoli. Specter gunships are commonly used by the Special Operations community to provide close air support.

According to sources on the ground during the attack, the special operator on the roof of the CIA annex had visual contact and a laser pointing at the Libyan mortar team that was targeting the CIA annex. The operators were calling in coordinates of where the Libyan forces were firing from.

Defense Secretary Leon Panetta told reporters at the Pentagon on Thursday that there was not a clear enough picture of what was occurring on the ground in Benghazi to send help.

“There’s a lot of Monday morning quarterbacking going on here,” Panetta said Thursday. “But the basic principle here … is that you don’t deploy forces into harm’s way without knowing what’s going on.”

U.S. officials argue that there was a period of several hours when the fighting stopped before the mortars were fired at the annex, leading officials to believe the attack was over.

Fox News has learned that there were two military surveillance drones redirected to Benghazi shortly after the attack on the Consulate began. They were already in the vicinity. The second surveillance craft was sent to relieve the first drone, perhaps due to fuel issues. Both were capable of sending real time visuals back to U.S. officials in Washington, D.C. Any U.S. official or agency with the proper clearance, including the White House Situation Room, State Department, CIA, Pentagon and others, could call up that video in real time on their computers.

Tyrone Woods was later joined at the scene by fellow former Navy SEAL Glen Doherty, who was sent in from Tripoli as part of a Global Response Staff or GRS that provides security to CIA case officers and provides countersurveillance and surveillance protection. They were killed by a mortar shell at 4 a.m. Libyan time, nearly seven hours after the attack on the Consulate began — a window that represented more than enough time for the U.S. military to send back-up from nearby bases in Europe, according to sources familiar with Special Operations. Four mortars were fired at the annex. The first one struck outside the annex. Three more hit the annex.

A motorcade of dozens of Libyan vehicles, some mounted with 50 caliber machine guns, belonging to the February 17th Brigades, a Libyan militia which is friendly to the U.S., finally showed up at the CIA annex at approximately 3 a.m. An American Quick Reaction Force sent from Tripoli had arrived at the Benghazi airport at 2 a.m. (four hours after the initial attack on the Consulate) and was delayed for 45 minutes at the airport because they could not at first get transportation, allegedly due to confusion among Libyan militias who were supposed to escort them to the annex, according to Benghazi sources.

The American special operators, Woods, Doherty and at least two others were part of the Global Response Staff, a CIA element, based at the CIA annex and were protecting CIA operators who were part of a mission to track and repurchase arms in Benghazi that had proliferated in the wake of Muammar Qaddafi’s fall. Part of their mission was to find the more than 20,000 missing MANPADS, or shoulder-held missiles capable of bringing down a commercial aircraft. According to a source on the ground at the time of the attack, the team inside the CIA annex had captured three Libyan attackers and was forced to hand them over to the Libyans. U.S. officials do not know what happened to those three attackers and whether they were released by the Libyan forces.

Fox News has also learned that Stevens was in Benghazi that day to be present at the opening of an English-language school being started by the Libyan farmer who helped save an American pilot who had been shot down by pro-Qaddafi forces during the initial war to overthrow the regime. That farmer saved the life of the American pilot and the Ambassador wanted to be present to launch the Libyan rescuer’s new school. source – Fox News