“We’ll raise it." Senate Majority Leader Harry Reid said on Wednesday that if the $16.394 trillion current legal limit on the federal government's debt must be raised in the... 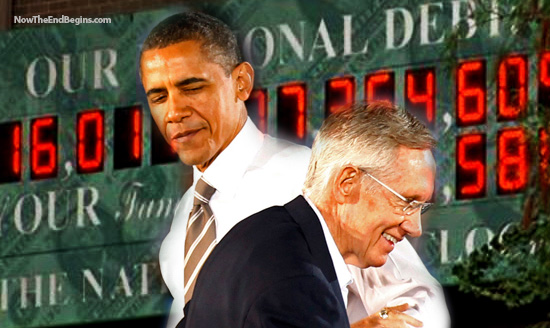 They no longer pretend that the national debt is something they have any intentions of reducing.
by Geoffrey Grider November 8, 2012
NOW THE END BEGINS SHARE:

Senate Majority Leader Harry Reid (D-Nev.) said on Wednesday that if the $16.394 trillion current legal limit on the federal government’s debt must be raised in the next few months by another $2.4 trillion, “We’ll raise it.”

They no longer pretend that the national debt is something they have any intentions of reducing.

During a Capitol Hill press conference on Wednesday, CNSNews.com asked: “Senator Reid, the Treasury Department said last week that we will hit the debt ceiling again near the end of the year. Are you prepared—will you support—”

“I think the debt ceiling will come after the first of the year,” Reid said. “But please everyone accept this: They tried it before—they, the Republicans.”

“They tried it before – ‘We’re going to shut down the government, and we’re not going to raise the debt ceiling,’” he said. “If they want to go through that again, fine.”

“But we’re not going to be held subject to something that was done as a matter of fact in all previous administrations,” Reid said.

CNSNews.com then asked, “But will you support raising it by another $2.4 trillion?” “If it has to be raised, we’ll raise it,” he said.

On Aug. 2, 2011, Congress and President Barack Obama reached a deal to raise the debt ceiling by $2.4 trillion. Now, after only 15 months, almost all of that additional borrowing authority has been exhausted, according to the U.S. Treasury Department.

CNSNews.com reported that Treasury quietly announced a week ago that it expects the federal government to hit its legal debt limit before the end of this year.

“Treasury continues to expect the debt limit to be reached near the end of 2012,” said the 10th paragraph of the “Quarterly Refunding Statement” put out by Assistant Secretary of the Treasury for Financial Markets Matthew Rutherford.

“However, Treasury has the authority to take certain extraordinary measures to give Congress more time to act to ensure we are able to meet the legal obligations of the United States of America,” the statement said. source- CNS News