A southern California couple has been fined $300 dollars for holding Christian Bible study sessions in their home, and could face another $500 for each additional gathering. City officials... 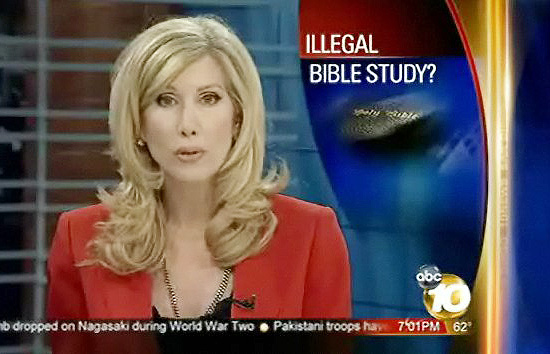 We are already starting to see the push by government to make all bible study, home or otherwise, illegal
by Geoffrey Grider September 20, 2011
NOW THE END BEGINS SHARE:

They are coming to take the Book from you

A southern California couple has been fined $300 dollars for holding Christian Bible study sessions in their home, and could face another $500 for each additional gathering.

We are already starting to see the push by government to make all bible study, home or otherwise, illegal

City officials in San Juan Capistrano, Calif. say Chuck and Stephanie Fromm are in violation of municipal code 9-3.301, which prohibits “religious, fraternal or non-profit” organizations in residential neighborhoods without a permit. Stephanie hosts a Wednesday Bible study that draws about 20 attendees, and Chuck holds a Sunday service that gets about 50.

The Fromms appealed their citations but were denied and warned future sessions would carry heftier penalties. A statement from the Pacific Justice Institute, which is defending the couple in a lawsuit against the city, said Chuck Fromm was also told regular gatherings of three or more people require a conditional use permit, which can be costly and difficult to obtain.

“How dare they tell us we can’t have whatever we want in our home,” Stephanie Fromm told the Capistrano Dispatch. “We want to be able to use our home. We’ve paid a lot and invested a lot in our home and backyard … I should be able to be hospitable in my home.”

According to the Dispatch, the Fromms live in a neighborhood with large homes and have a corral, barn, pool and huge back lawn on their property, so parking and noise aren’t a problem.

The Dispatch reported a code-enforcement officer gave the Fromms a verbal warning about the meetings in May, then returned to issue citations in June and July. According to the paper, the city’s code-enforcement department is reactive, meaning they only respond to complaints. source – The Blaze