They say the only two things that are certain in life are death and taxes. President Barack Obama wants to add one more: voting.... 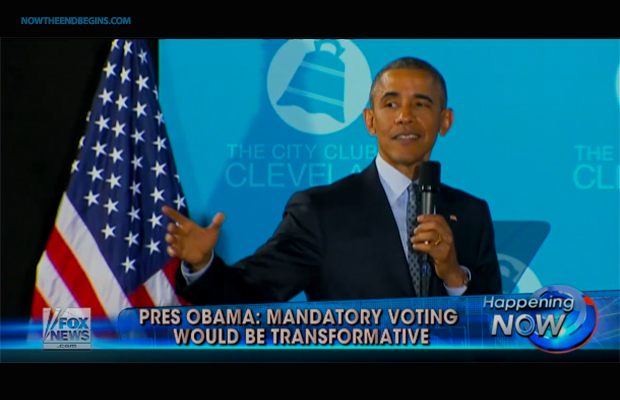 They say the only two things that are certain in life are death and taxes. President Barack Obama wants to add one more: voting.

Don’t think this could ever happen? Oh, you mean like they could never force American citizens to purchase government-provided health care, and fine them if they refuse?

“If you like your vote, you can keep your vote”, they all chanted as they were led away to internment camps.

Obama floated the idea of mandatory voting in the U.S. while speaking to a civic group in Cleveland on Wednesday. Asked about the influence of money in U.S. elections, Obama digressed into the topic of voting rights and said the U.S. should be making it easier for people to vote.

Just ask Australia, where citizens have no choice but to vote, the president said.

“If everybody voted, then it would completely change the political map in this country,” Obama said, calling it “potentially transformative.” Not only that, Obama said, but universal voting would “counteract money more than anything.”