“The mission of Satanic Students at NC State University is to 1) encourage benevolence and empathy among all people, 2) reject tyrannical authority, 3) advocate scientific examination of the universe and our place in it, 4) promote morality and justice based on rational, humanistic values, and 5) be directed by the human conscience to undertake noble pursuits guided by the individual will.”

Give the Devil his due, folks, he’s earned it. Seriously. First he convinced people that he’s not real, now he’s convincing people that you can be a satanist and not worship Satan. That requires some pretty deep levels of deception to pull that off. In case you haven’t noticed, satanism in America is experiencing  a meteoric rise in popularity in our day.

Remember when college was a time in a young person’s life when they went to receive a higher education? Now it’s a place where people have their faith ripped out of their hands, and the god of this world is glorified. I find it interesting that some of the stated ‘core values’ of the Students For Satan club include, humanism, self-love and urging people to be guided by their “individual will”. Now where have I heard that before? I find it fitting that the mascot of the NC State sports teams is an angry, snarling wolf baring its teeth. Wolfpack, indeed.

“For thou hast said in thine heart, I will ascend into heaven, I will exalt my throne above the stars of God: I will sit also upon the mount of the congregation, in the sides of the north: I will ascend above the heights of the clouds; I will be like the most High.” Isaiah 14:13,14 (KJV)

Hate to break it to you, millennial geniuses, but any group that calls themselves ‘satanic students’ is indeed a group whose followers are satanists, and walking after the Devil himself. Are you worshipping Satan? You absolutely are. And while I’m at it, shame on you so-called Christian students at NC State for not rising up against this burgeoning evil. If you’re going to ‘live and let live’, which is not a Bible teaching, you might as well become a satanic student yourself. But thanks for proving to all our readers around the world that we are indeed in the end times.

FROM THE COLLEGE FIX: The club calls itself “Satanic Students at NC State,” and its leaders say they promote humanism and are working to build up the fledgling group at the Raleigh-based public university.

“This semester, the group has held public meetings to attract and gain interest,” Satanic Students told The College Fix in an email interview. “These meetings have largely consisted of discussions with new and potential members about the type of Satanism practiced by the group.”

According to its “get involved” website: “The mission of Satanic Students at NC State University is to 1) encourage benevolence and empathy among all people, 2) reject tyrannical authority, 3) advocate scientific examination of the universe and our place in it, 4) promote morality and justice based on rational, humanistic values, and 5) be directed by the human conscience to undertake noble pursuits guided by the individual will.” 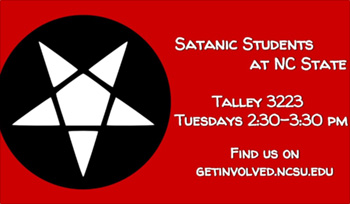 “Our principles and those of objectivism overlap by a fair amount and believe that objectivists would find value in our group,” Satanic Students told The College Fix via email.

“At future public meetings, we hope to perpetually refine our group’s mission through identifying, and challenging, consensus views among the membership; acting on those views when sufficient support is reached,” the group said.

“Members come from a variety of religious and non-religious backgrounds,” the email stated, adding that despite the fact that there is “a substantial Christian presence … projected around campus, most students have a ‘live and let live’ attitude that we respect and gladly reciprocate. We have yet to encounter any significant backlash.”

As for its political affiliations, the group may take political stances, but only when consensus exists among the group, “which could be rare given how philosophically and politically varied the group is shaping up to be,” Satanic Students stated in its email to The College Fix.

In an interview with Technician, Peter Aker, a junior studying chemical engineering and president of Satanic Students, cited an example of The Satanic Temple of Arizona’s “Menstruatin’ With Satan” campaign to distribute free feminine health care products to those in need as the kind of event that illustrates Satanism is not all about Satan worshipping.

“I want to start having more displays of symbology, like having chalkings around campus or putting up posters,” Aker said. “Fitting along the lines of these things like, believing in yourself or loving yourself, talking about individuality. But really it’s all up to the membership and what they want to do.”

According to a 2017 column in Crisis Magazine, a Catholic publication, there is a “growing threat” from Satanism underway in the U.S. The article cites the increase seen recently in “After School Satan Clubs” as well as efforts to get Satanic monuments erected on public land.

“The real issue is all about the mainstreaming of Satanism in America. Much as the same-sex ‘marriage’ debate was about acceptance of the homosexual lifestyle, so also Satanic groups seek social acceptance,” according to the column. “Indeed, this is what the Satanists themselves declare. For them, it has nothing to do with religious practices. Many of them even allege they have none. They simply want to mainstream Satanism so that it will be viewed as normal.”

“… As long as the devil is rejected in the minds of people anywhere, there remains some objective distinction between good and evil.” READ MORE

The Satanic Temple (TST) has announced that this coming school year (2016) will find their organization operating in elementary schools across the nation where they will be offering their new After School Satan Club program to students.