Newsweek Now Says That Obama Is ‘The Second Coming’

Newsweek celebrated President Obama's upcoming inauguration with a "cover" that calls the event "the second coming," an apparent reference to the return of Jesus Christ... 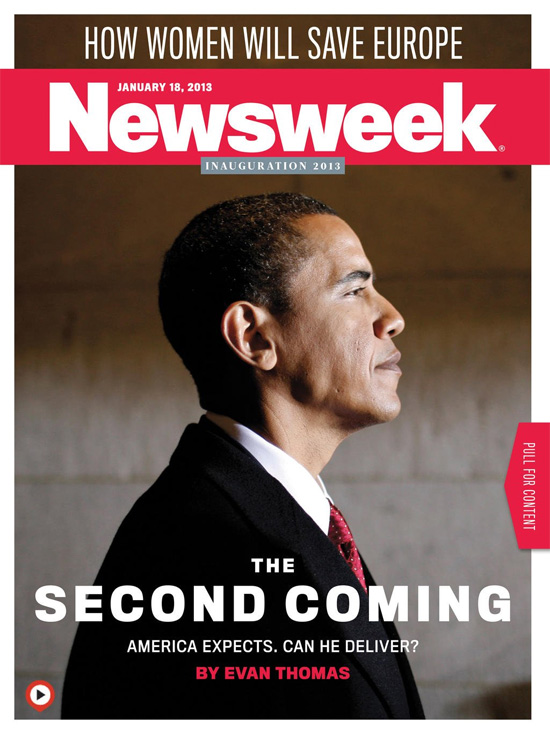 By definition, a "messiah" thats not Jesus Christ would have to be the Antichrist. Just sayin'...
by Geoffrey Grider January 19, 2013
NOW THE END BEGINS SHARE:

False christs and the end times

“For there shall arise false Christs, and false prophets, and shall shew great signs and wonders; insomuch that, if it were possible, they shall deceive the very elect.” Matthew 24:24

Although it is now digital, Newsweek celebrated President Obama’s upcoming inauguration with a “cover” that calls the event “the second coming,” an apparent reference to the return of Jesus Christ, The Blaze reported Friday.

By definition, a “messiah” that’s not Jesus Christ would have to be the Antichrist. Just sayin’…

A post at Twitchy called the cover “creepy,” while The Blaze described it as “controversial” and “questionable.”

The cover highlights an article by former editor Evan Thomas, who once compared Obama to God

“Well, we were the good guys in 1984, it felt that way. It hasn’t felt that way in recent years. So Obama’s had, really, a different task We’re seen too often as the bad guys. And he – he has a very different job from – Reagan was all about America, and you talked about it. Obama is ‘we are above that now.’ We’re not just parochial, we’re not just chauvinistic, we’re not just provincial. We stand for something – I mean in a way Obama’s standing above the country, above – above the world, he’s sort of God,” he told Chris Matthews in 2009.

This is not the first time Newsweek has used such a theme when portraying Obama.

A cover in 2010 called him “god of all things” and another cover used religious imagery when praising the president for his latest stand supporting gay marriage.

After Obama won re-election, Newsweek portrayed him as a conqueror dressed in an 18th century uniform. Twitchy noted that a number of conservatives on Twitter were repulsed by the cover.

“I don’t tend to get indignantly offended that easily, but this Newsweek cover is makes me ill,”tweeted Ben Howe.

“The Second Coming? Really? You’ve got to be kidding me,” another person wrote.

Another Twitter user said the publication went “full Jim Jones,” a reference to the cult leader who led his followers to their death by drinking poison. Twitchy reminded readers that Newsweek was not as nice to George W. Bush when he was inaugurated in 2005. source – Examiner