Gov. Andrew Cuomo Killed 10,000 New Yorkers By Executive Order, Then Lied About It And Tried To Hide It, Why Isn’t This The Scandal Of The Decade?

Andrew Cuomo was being held as a hero of the pandemic, spending hours with his brother on CNN laughing about which one of them is their mother’s favorite, or that Chris Cuomo is a meatball, or that Andrew Cuomo has large nostrils. All while Americans died by the thousands in nursing homes.

Night after night, at the height of the COVID-19 pandemic, New York governor Andrew Cuomo went on television with press conferences, and in ‘comedy sketch’s’ with his brother Christ ‘Fredo’ Cuomo, designed to show what a great leader the elder Cuomo was. When it was all said and done, two things happen. The first thing being the Emmy award that was given to Andrew Cuomo for his ‘masterful handling’ of the COVID crisis in New York. And the second thing? The death of over 10,000 elderly in nursing homes that he desperately tried to cover up.

“I call heaven and earth to record this day against you, that I have set before you life and death, blessing and cursing: therefore choose life, that both thou and thy seed may live:” Deuteronomy 30:19 (KJB)

Andrew Cuomo issued an executive order that ordered people sick with COVID to be sent back to their nursing homes, and when that order was carried out, it directly contributed to the death of over 10,000 New Yorkers. It was the mother of all super-spreader events. Cuomo and his buddies at CNN have spent these many months deflecting and denying the truth of those events, right up to the moment his own aide stepped forward and revealed the truth. But then Andrew Cuomo has long courted a culture of death in New York, even inviting the Hindu goddess Kali to be worshipped on the outside of the Empire State building. How’s that death culture thing working out, Andy?

Why Isn’t Andrew Cuomo’s Deadly Coronavirus Cover-Up In Nursing Homes The Scandal Of The Decade?

FROM THE DAILY WIRE: In early March, before COVID-19 took hold of New York and New York City, Cuomo was downplaying the threat, saying “Everybody is doing exactly what we need to do,” and “We have been ahead of this since Day 1.” Flash forward almost twelve months, and Cuomo and his administration are being investigated by the FBI and federal prosecutors.

Not just because Cuomo rode the waves of Democratic party and legacy media adoration to focus on presenting himself as our messianic savior in the face of Trump’s alleged federal failures — including finding time in his busy schedule to write a book applauding his New York leadership and accepting an Emmy for “his effective use of television during the pandemic.” 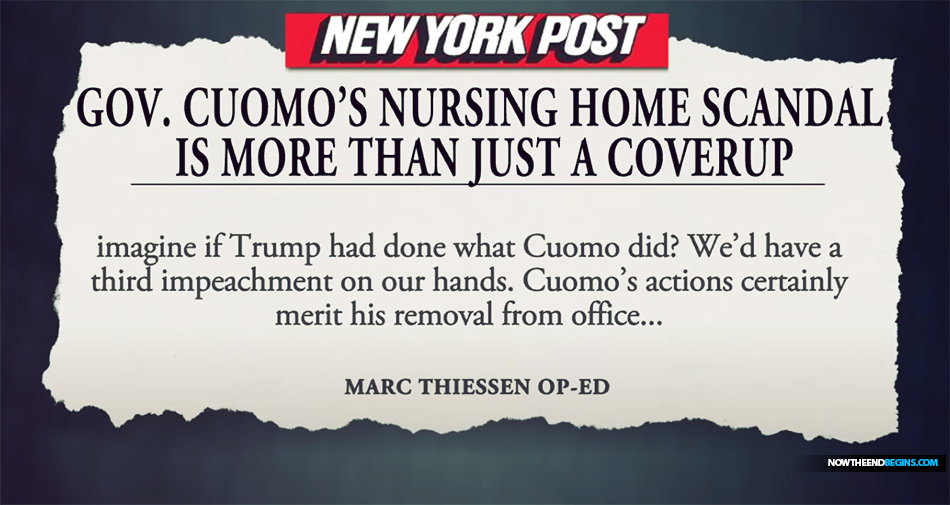 No, the main reason Cuomo is now being investigated is that Melissa DeRosa, Secretary to the Governor, admitted to Democratic legislators that they intentionally hid COVID-19 data on nursing home deaths out of fear of federal prosecutors. As the New York Post reported, DeRosa then apologized not to the families of senior citizens who died, but to Democratic lawmakers for “the position that [they] were put in.”

Americans on both sides of the aisle should be united in their merciless condemnation of what is arguably the biggest scandal in modern American political history. The governor of New York — alongside his administration — engaged in months of ineptitude, corruption, and deceit. Cuomo quietly enforced the March 25 mandate which resulted in appalling, deadly and — most disgustingly — avoidable outcomes for thousands of his constituents. Deep in budget negotiations — page 347 to be precise — he buried a provision which protected nursing homes and other facilities from lawsuits which would predictably follow from his decision to import COVID-19. And, for months, he and other members of his administration fought to hide the true impact of his disastrous policies, even blaming the CDC or nursing homes for the explosion in COVID-19 death rates.

Simultaneously, Cuomo was being held as a hero of the pandemic, spending hours with his brother on CNN laughing about which one of them is their mother’s favorite, or that Chris Cuomo is a meatball, or that Andrew Cuomo has large nostrils. All while Americans died.

This should be the scandal of the decade. We should all think very deeply about why it’s not. READ MORE

New York State Assembly Republican Leader Will Barclay says ‘there is enough evidence to being this process,” giving an update on the move to impeach the governor of New York.