The New ‘Radically Inclusive’ Mega-Church Says Bring Your Own God

The Radically Inclusive Spirit and Truth Sanctuary, which D.E. Paulk founded in 2012, welcomes everyone from Wiccans to atheists, Hindus to Muslims, recognizing all gods and prophets, including Mohammed.... 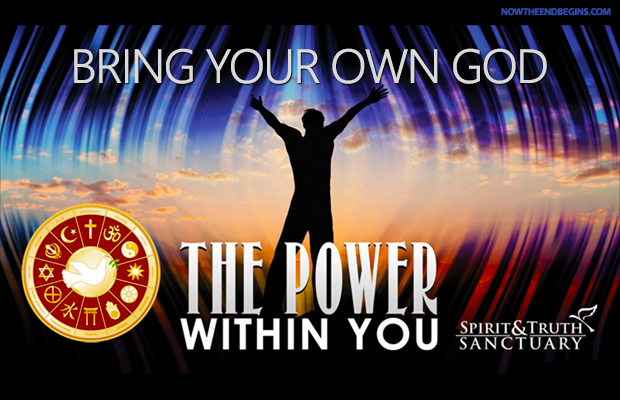 “I Don’t Know is the required confession needed to be granted admission to the path of enlightenment and to The Way of Knowing.” DE Paulk

“And hereby we do know that we know him, if we keep his commandments. And this is his commandment, That we should believe on the name of his Son Jesus Christ, and love one another, as he gave us commandment.” 1 John 2:3, 1 John 3:23 (KJV)

EDITOR’S NOTE: As we get deeper into the Laodicean church age, God is being replaced by many gods, with no one way or one path to truth. Jesus in Revelation 3 says that last church is “blind and naked”, spiritually confused and stumbling around in the dark and groping for answers which become more and more elusive. The Spirit and Truth Sanctuary is just one of many hundreds of contemporary mega-churches who have abandoned the clear teachings of the Bible.

People have always tried to increase the number of church members. Well, there is a new trend, and they are packing in people like never before! Here is the catch: They advertise that ALL beliefs are welcome. You just have to believe in something, and I suppose that means you can be an atheist too!

They are calling themselves “Radically Inclusive” churches. They even have a slogan: BYOG. That stands for “Bring your own god.” If these churches stand for anything and everything, then what is their purpose?

One such church that has gotten quite a bit of attention lately is led by D.E. Paulk.  The son of Earl Paulk, he was once considered to be the “heir apparent” at one of the largest mega-churches in America.  But these days he leads worship at a church that recognizes “all gods and prophets, including Mohammed”.

The Spirit and Truth Sanctuary, which D.E. founded in 2012, welcomes everyone from Wiccans to atheists, Hindus to Muslims, recognizing all gods and prophets, including Mohammed.

‘All you have left is who you are. The games are gone… If there was anything I wanted to say I thought would be unacceptable to the church, now is the time to say it.’

After much soul searching, D.E. established his church based around one principle: ‘Christ cannot be, and will not be, restricted to Christianity‘. Paulk insists that there is “no hell except what one creates with one’s own actions“, and he is very proud of the diverse group of people that currently attends his service

Today, the church is a rarity on many levels: interfaith, interracial, a mosaic of people deep in the Bible Belt where many churches remain segregated. The church has gay couples, college students, agnostics, some Muslims and even a Wiccan priest. Pictures of the Rev. Martin Luther King Jr. and Mahatma Gandhi adorn the walls.

A stained glass window looming over the pulpit captures the spirit of the church. It’s a design that contains a Christian cross, ringed by symbols from Judaism, Islam and Hinduism. In the middle is a dove, which symbolizes the spirit of peace that binds them all together.

Pastor Paulk has written a book called “I Don’t Know”, and in it says this:

“All Truth flows to us from One Divine River. From that One River many wells form and are fed. We might call these wells religions, cultures or philosophies. All wells sustained by the One River contain beauty and truth. However, we make a grave mistake when we declare any particular well as being the One River.” source

Jesus, on the other hand, says this:

Here is how a CNN reporter described a service at the Sanctuary:

The service then started to feel like a Pentecostal tent-revival but with an unusual twist. A group of singers took to the stage and opened with a hypnotic Tibetan Buddhist chant that evoked the spirit of compassion: “Om Mani Padme Hum.”

The chant segued into “Shanti, Shanti Om,” a Hindu prayer for peace. Then as the chanting grew louder, the drums and bass kicked in as the singers switched to a Muslim chant about the sovereignty of God: “La ilaha, Il Allah.”

This person really summed it up clearly for us:

“After years of spiritual reflection and inquiry, I am at a place where I don’t want to feel guilty, hypocritical, judgmental, closed-minded or arrogant. So, where do I stand now — 30 years after “finding God,” questioning my faith, committing sins, seeking hazardous adventure and trying to love life and people to the best of my ability? I am a “seeker.” A constant seeker within this world, among people and, of course, for spiritual enlightenment of all kind. Because if I did possess the truth — the “final answer” — I am convinced I would spend the rest of my years missing out on the enrichment and surprise of seeking it.” source

Remember “Seeker Sensitive churches?” Well, there you go. That slippery slope has finally hit the bottom!!