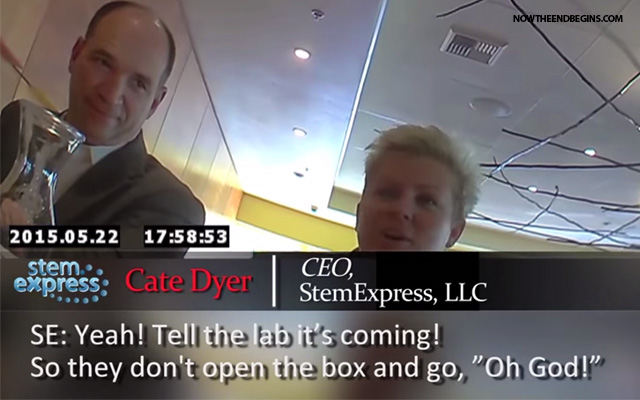 There are no graphic images in the video, but Dyer’s comments about shipping the severed intact “calvarium” or skull of an aborted baby are bonechilling.

StemExpress: I know we get requests for neural [tissue]. It’s the hardest thing in the world to ship.

Buyer: You do it as the whole calvarium.

StemExpress: That’s it, yeah, that’s the easiest way. And I mean we’ve actually had good success with that in the past.

Buyer: Yeah, Make sure the eyes are closed!

StemExpress: [Loud Laughter] Tell the lab it’s coming. So they don’t open the box and go, “Oh God!” [Laughter] So yeah, whereas so many of the academic labs cannot fly like that. They’re just not capable.

Buyer: Why is that? I don’t understand that.

StemExpress: It’s almost like they don’t want to know where it comes from. I can see that. Where they’re like, “We need limbs, but no hands and feet need to be attached.” […] They want you to take it all off, like, “Make it so that we don’t know what it is.”

Buyer: Yeah. Bone the chicken for me and then I’ll eat it.

StemExpress: That’s it. But we know what it is [Laughter]. […] Their lab techs freak out, and have meltdowns, and so it’s just like, yeah. source