A two-decades-old battle between a Nevada rancher and the Bureau of Land Management (BLM) has resulted in officials armed with machine guns surrounding the ranch and forcibly removing the... 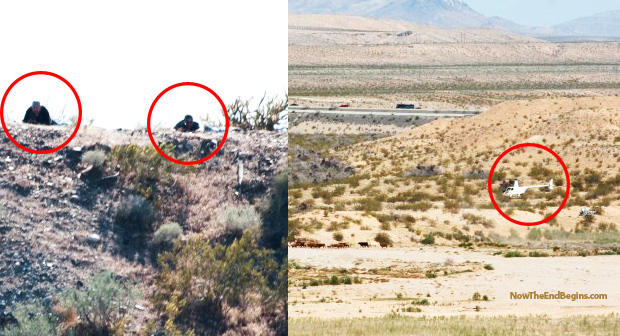 Obama’s private civilian army is now just as heavily armed as soldiers on a foreign battlefield, and they are beginning to assert themselves and make their presence known. What is playing out now in Nevada will be coming to your hometown very soon.

Nevada: A two-decades-old battle between a Nevada rancher and the Bureau of Land Management (BLM) has resulted in officials armed with machine guns surrounding the ranch and forcibly removing the owner’s cattle, according to the rancher’s family.

“Wake up America,” Logue said. “Look what our ancestors fought for and we need to stand up for that. We need to realize what’s happening. They are taking everything away from us. This isn’t only about one family. This is about everyone’s family. This is martial law and it’s in America and so what are you going to do to have it stay out of America?”

Cliven Bundy, the last rancher in Clark County, Nev., has been fighting a “one-man range war” since 1993, when he decided to take a stand against the agency, refusing to pay fees for the right to graze on a ranch run by his family for centuries.

After years of court battles, the BLM secured a federal court order to have Bundy’s “trespass cattle” forcibly removed with heavy artillery, the family said.

Lessons From Boston: This Is What Martial Law Looks Like from Now The End Begins on Vimeo.

His wife, Carol Bundy, said that roughly 200 armed agents from the BLM and FBI are stationed around their land, located about 75 miles outside of Las Vegas. Helicopters circle the premises, and the airspace and nearby roads remain blocked.

“We’re surrounded,” Carol Bundy said. “We’re estimating that there are over 200 armed BLM, FBI. We’ve got surveillance cameras at our house, they’re probably listening to me talk to you right now.”

A National Park Service spokesman denied there were armed guards rounding up the cattle in a conference call on Tuesday. However, she confirmed that there was “security” in place, citing threats to the contractors who are removing the cattle.

“Contractors are here and they are in place to round-up the cattle and to bring them to the impound area,” Christie Vanover said. “As for security, there [is] security in place, but that is merely to protect the contractors.”