Speaking at the dedication of the restored 1,500-year-old synagogue at the Umm al-Qanatir archeological site in the Golan Heights, Netanyahu warned that Iran and Hezbollah are “continuously trying to establish a force that will act against Israel in the Golan and Galilee. We will thwart that.”

If Israel withdraws from the Golan Heights it will find itself with Iran and Hezbollah on the banks of Lake Kinneret, Prime Minister Benjamin Netanyahu said on Monday

In the Bible, the Sea of Galilee is a place where many miraculous things occured in both the Old and New Testaments, and it has many names. The Sea of Galilee is also referred to as Kinneret or Kinnereth, Lake of Gennesaret, or Lake Tiberias. But all these names are talking about the same place.

“After these things Jesus went over the sea of Galilee, which is the sea of Tiberias. And a great multitude followed him, because they saw his miracles which he did on them that were diseased. And Jesus went up into a mountain, and there he sat with his disciples.” John 6:1-3 (KJV)

Today PM Benjamin Netanyahu made a passionate plea for the ongoing Israeli occupation of this area to remain. If not, he warned, there would be nothing there to stop the Iranian army and Hezbollah from coming down and ‘dipping their toes’ in this historical Jewish sea. Netanyahu is a bold and fierce defender of Israeli sovereignty, I cannot imagine where the Jews would be today without his leadership. Truly he is God’s appointed man for Israel and for the Jewish people in this day and age of turmoil that we live in.

FROM THE JERUSALEM POST: Speaking at the dedication of the restored 1,500-year-old synagogue at the Umm al-Qanatir archeological site in the Golan Heights, Netanyahu warned that Iran and Hezbollah are “continuously trying to establish a force that will act against Israel in the Golan and Galilee. We will thwart that.” 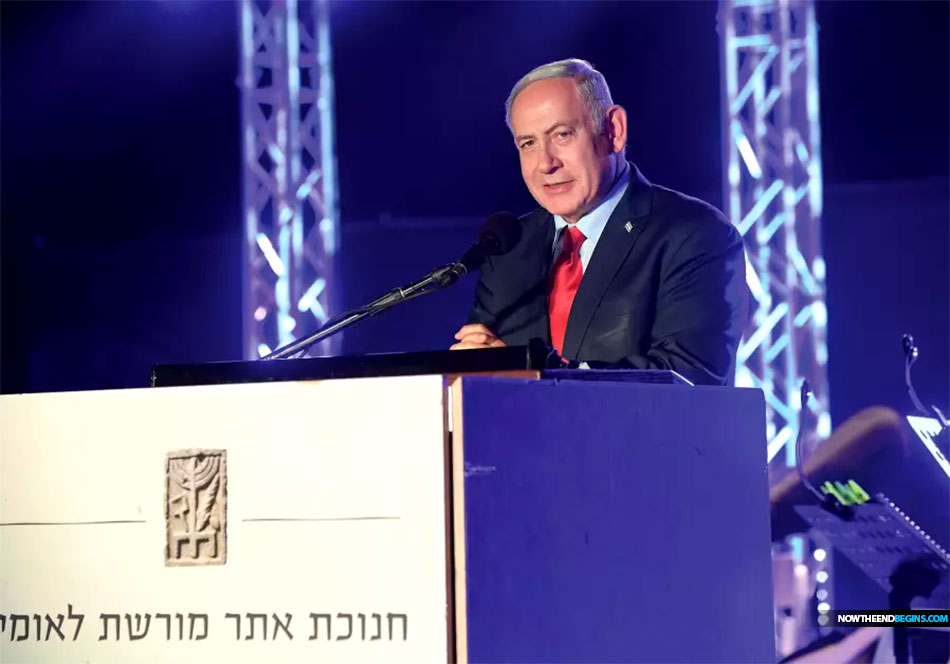 The prime minister noted that Israel’s presence in the Golan is a guarantor of stability in the area, and is justified by its ancient Jewish ties – something he said the international community should recognize.

“As long as it is dependent on me, the Golan will remain under Israeli sovereignty. Otherwise we will get Iran and Hezbollah on the banks of the Kinneret.”

Netanyahu reiterated that Jerusalem will “continue to act against Iranian efforts to open an additional front against us in the Golan and in Syria, and will act against efforts to transfer lethal weapons to Hezbollah.” Netanyahu also praised the restoration of Ein Keshatot, the largest historical synagogue discovered in the Golan to date, which was destroyed by an earthquake in 749 CE. The synagogue and connecting spring are viewed as one of the most significant historical sites uncovered in Israel, connecting the Jewish people to the Golan dating to the Byzantine period.

“You can only secure your future when you secure your past,” stated Netanyahu. “That is why we have given NIS 12.4 million to this project.”

The restoration, which took 15 years and cost NIS 30 million, was carried out by engineer Yehoshua Drey and archeologist Haim Ben-David of the Kinneret Academic College and Bar-Ilan University using 3D imaging technology to return the fallen basalt stones to their original positions.  READ MORE