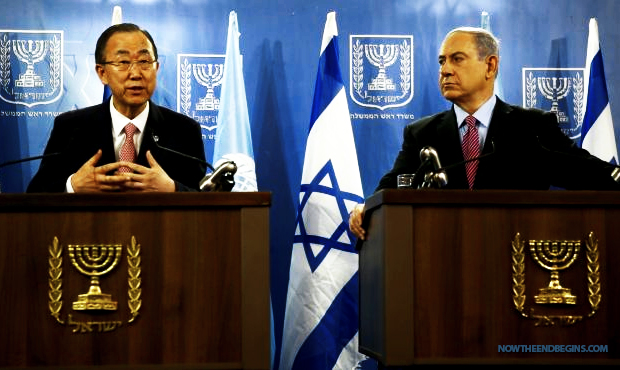 Netanyahu began by noting that the entire concept of an “occupation” in Gaza has been made moot after the 2005 Disengagement.

Israeli Prime Minister Binyamin Netanyahu fired at UN Secretary General Ban Ki-Moon’s insistence that the “occupation” justified Hamas’s launching over 3,600 rockets on Israeli civilians on Monday, in a series of remarks before a private meeting with the international figure.

“Hamas doesn’t give a hoot for the 1967 lines. For them, Israel has no right to live, in any borders. Hamas rejects our very existence. They’re committed to killing every Israeli and every Jew. You just have to read their charter – they say that very plainly.”

Netanyahu then pointed out that Ban justified Hamas’s rocket barrage despite the fact that it used the UN’s own facilities to break international law.

“The root cause of this summer’s outburst of violence was Hamas‘ rocketing of Israeli cities, and these rocket attacks often exploited UN neutrality, using UN facilities and UN schools as part of the Hamas machine of terror,” he thundered. “And when rockets were discovered inside UN schools, some UN officials handed them back to Hamas – that very same Hamas that was rocketing Israeli cities and Israeli civilians.”

The Prime Minister then reiterated the fact that Hamas is a terror group dedicated to genocide against Jews.

“The root cause of Hamas’ rocket fire on Israel is Hamas’ opposition to Israel’s very existence,” he declared. “Hamas doesn’t give a hoot for the 1967 lines. For them, Israel has no right to live, in any borders. Hamas rejects our very existence. They’re committed to killing every Israeli and every Jew. You just have to read their charter – they say that very plainly.”

“So Hamas is the enemy of all of us who seek peace,” he continued.

Netanyahu did insist that peace, however, could “only be achieved” through peace talks – slamming as well the Hamas-Palestinian Authority (PA) “unity government”‘s pledge to prosecute Israel in the International Criminal Court (ICC).

“A real peace can only be achieved through bilateral negotiations with those who believe in peace,” he said. “I believe that unilateral steps by the Palestinians at the United Nations will not advance peace. I think they’ll do the very opposite. They’ll bring about a further deterioration in the situation – something none of us want.”